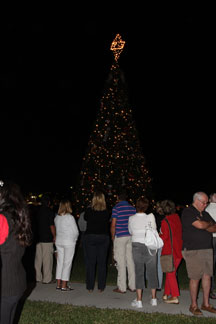 Steve Stefanides really doesn’t want you to give him credit for pulling together the month-long series of holiday events that is Christmas Island Style. He declined a photo for this piece and credits the generosity of event sponsors before his own work. (Well, we did ask him to sport a holiday sweater, so the photo ducking is understandable.) However, when many a monument to ego-building masquerades as a good deed, this modesty is refreshing. In fact, Marco’s surrogate Santa does much more than coordinate a tree lighting, and Christmas Island Style is more than a good time.

Christmas Island Style operates with a budget of approximately $20,000. It conducts a series of fundraisers beginning in November and solicits private donations. Key business members also contribute in-kind contributions. For example, Condee Cooling and Electric handles lighting for the tree and the parade.

Now in its 24th year, Christmas Island Style was founded by Donna Nordegren under the Marco Chamber. Stefanides inherited the project in 2005 with the goal of making it self-sufficient. “We wanted to wean it off city funding. Marco is a very generous community and we felt that the community could support it.” Stefanides’ role is part diplomat, part cheerleader as he pulls together a committee of 27, along with other volunteers, sponsors and participants in a series of events that occur weekly until Dec. 21st.

“It’s pretty much year round planning. People join the committee and I put them in charge of something!” laughs Stefanides. This year, Wayne and Sue Purvis, residents and dog lovers, signed on 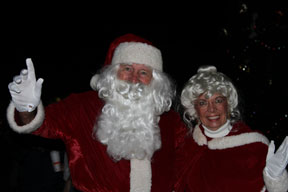 and will coordinate ‘Holiday Pets on Parade,’ on Dec. 6th at Town Center Mall. New to Christmas Island Style, at this event pet owners can bring their pets in costume to the mall from 3 to 5PM. Prizes will be awarded.

Also new this year, on Dec. 18, the Historical Society will re-enact Christmas ceremonies at the Marco Island Historical Church, located on the property of the New Life Community Church of God. “We wanted to draw attention to it because it’s the oldest church on Marco and it’s being restored,” points out Stefanides.

“Next year is our 25th anniversary. We want to get the kids into a big pile of snow. We’d also like to do an old-fashioned hay ride.”

The proverbial reason for the season isn’t lost in the parties and parades. According to Stefanides, about 10% of the Christmas Island Style budget is spent helping out needy members of the community. Although the giving is quiet, its impact is significant.

The committee works with school guidance counselors and the school resource officer from the police department to identify families in need and distribute Publix and Winn-Dixie gift cards as well as clothing and toys. They also feed the public service employees on holiday duty.

One recent year, a resident was caring for her sister, terminally ill with stage four cancer, and her sister’s preschool age daughter. Christmas Island Style arranged for Santa to make an unforgettable arrival on a fire truck, bearing gifts, thereby making the last Christmas the woman would 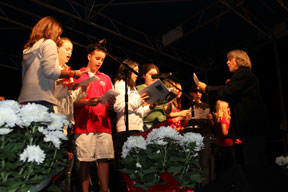 spend with her child a wonderful memory for both of them in the face of an incipient tragedy.

And that is why, beyond the fun, Stefanides has made a year-round project of planning Christmas. For him, the work is a reflection of the generosity of spirit he feels surrounded by in his community. “All you really need is that smile, whether it’s from a retiree or a child; that’s all the payback you need.”

• December 12 and 13– Judging begins for Best Decorated Home. (If you put up lights, your home is an automatic entry.)

• December 18– Pageant at the Historic Marco Church. On property of the New Life Community Church of God. 6 pm.