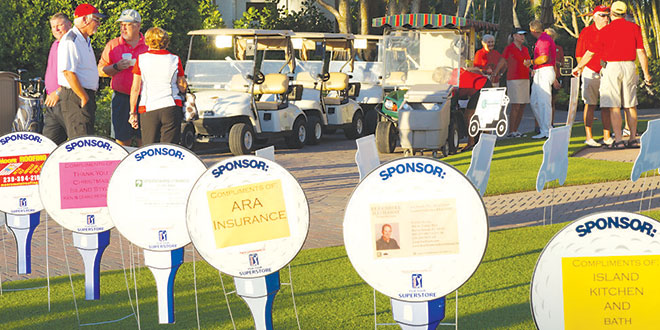 The tournament was hosted by the Marco Marriott’s Hammock Bay Golf Course. More than 90 hole sponsors and 100 golfers helped the group raise close to $14,000.

The co-chairs of the event, Wayne and Sue Purvis, Wanda Day, Gene Burson and Barbara Dasti worked hard to make the event the success that it was.

Although there were two hole-in-one prizes offered, neither one were won during the tournament. One prize consisted of $10,000 cash, sponsored by

Barbara and Carmen Dasti at the luncheon following the tournament.

“This event would not have been possible if not for all of the volunteers that work on the Christmas Island Style events all during the holiday season.  Combine that with the generosity of our many businesses and individuals on the island to sponsor the event in you have a win-win for the entire community,” said Steve Stefanides, the Chairman of Christmas Island Style. 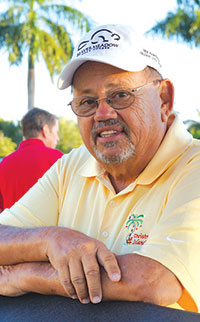 with Santa and the tree lighting. Pre-holiday fundraisers, such as the golf tournament, are critical for the organization, and enable them to provide these programs to the public free of charge.

The next fundraiser for Christmas Island Style will be a festive Casino Night on Saturday evening October 17 from 6 to 9 PM at the Rose Historical Auditorium on the campus of the Marco Island Historical Museum on South Heathwood Drive. Admission for the event is $35 and attendees will be provided with game chips and a free drink, and will be able to bid on many excellent prizes with their casino winnings.