CHRISTMAS GIFTS FROM THE SEA 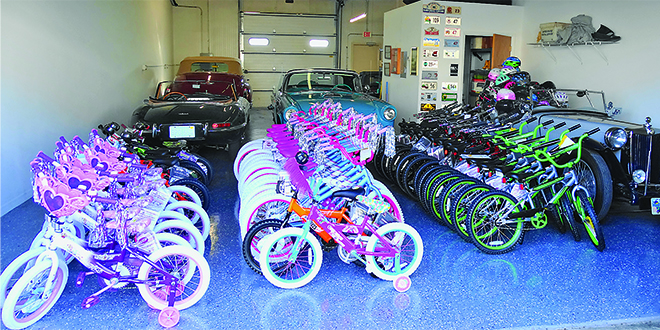 The men and women of the Marco Bay Yacht Club (MBYC) went the extra mile to help light up the lives of many needy children in Collier County. They contacted members of Christmas Island Style to find out where 46 bicycles could find a needy home this Christmas.

“Last year, we surprised the Christmas Island Style group with eight bikes at their reviewing stands at the end of the parade,” said Brent Cook. “We knew we could do better. Through the generosity of our members, we were able to purchase 46 bikes.”

“This overwhelming gesture by these Marco Islanders will go a long way to brightening a lot of children’s lives here in the community,” said Spano who has a special connection to Marco Island. He served as the principal at Tommy Barfield Elementary School a number of years ago when he worked for Collier County Public Schools.

Those remaining six bicycles, and the other gifts collected by Christmas Island Style, were delivered to The Shelter for Abused Women and Children serving Collier County by committee members

to brighten those lives during the holiday season.

“The Guadalupe Center and The Shelter for Abused Women and Children are wonderful recipients for these gifts from our members,” said Commodore Bob Boland of the MBYC, who expressed his appreciation to Christmas Island Style for its help in finding the appropriate homes for the gifts.

Commodore Boland also complimented member John Kernan who stored the bikes and members Brent Cook, Kernan, Bob Herndon and Rudi Landwaard who helped move the bikes with him to the Guadalupe Center.

Founded in 1968, the Marco Bay Yacht Club is the oldest organization on Marco Island focused on boating activities and the oldest Yacht Club on the island. The club boasts membership of over 100 families. In 2017, MBYC will celebrate their 49th anniversary.

Each month, their members take cruises that last from 10 to 20 days in length on their boats. In addition to those cruises, they hold at least two socials each month for members no longer capable of making extended cruises, but are still interested in the activities of the organization.

In January 2017, the present commodore, Bob Boland, will be handing over the “bridge” to Frank Mulligan who will assume those duties at the “Change of Watch,” ceremony. The Old Marco Lodge & Crab House serves as their “home port” for the club.