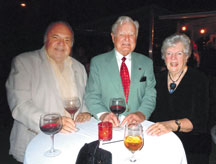 The Marco Island Chamber of Commerce in cooperation with the Marco Eagle and the Naples News Media Group, hosted the 24th Annual Marco Island Christmas Gala on Sunday evening, December 4th. The event was held at the Bistro Soleil in the Olde Marco Inn. The weather cooperated with cool, easy breezes on the deck during a leisurely cocktail hour.

Barbara Prigge, whose husband is a new member of the Marco Island Fire Rescue Foundation and treasurer of the Marco Island Police Foundation explained. “I am home decorating our house every year at this time. This year, I started the day after Halloween so I could enjoy the Christmas season. We’re all done and now I can accept all the Christmas invitations and celebrations coming up.” Lou and Barbara live just over the bridge on Collier Blvd. and islanders know their home by the beautiful holiday decorations they so generously share with all visitors and residents. Barbara extended an invitation to all to drive through this season because they have added some neat surprises, fun for all ages to see and enjoy.

Lou shared his feelings about the evening’s event. “What I like most about Marco is that there are so many volunteers. We love Marco and the generous spirit of all the people. Whatever the organization, Islanders 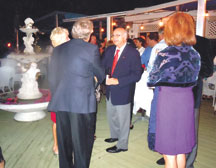 are right there with time and money to help out. We seldom hear the word, no, which is amazing considering how many worthy causes the same people are called upon to support and, now, the need is greater than ever.”

Lou’s feelings summed up the positive, festive atmosphere at this animated, fashionable evening. Susan and Wayne Purvis, board members of Christmas Island Style, were relaxing on the deck before dinner. Susan was President of the Marco Island Woman’s Club last year and enjoys being active in the busy life of the island. The couple serves on Christmas Island Style and particularly admires the energy and effective work of the Chamber. Wayne and Susan were looking forward to the evening’s presentations to outstanding Marco citizens.

Sandi Riedemann, Executive Director, Marco Island Area Chamber of Commerce, welcomed the guests and invited Stef Stefanides to make a special presentation to Curt and Jacquie Koon of C J’s on the Bay for their impressive generosity to the island. Their restaurant has been the venue for a number of events, one in particular dear to Stef’s heart, Christmas Island Style.

Shane Totten, teacher at Charter Middle School and his 6th grade class were recognized for their clever work creating designs from which a winner has been selected for the past four years. Christmas ornaments are on 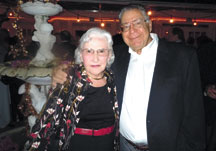 Jane Marlowe and Monte Lazarus before the awards. PHOTOS BY JUDY MAYO

Condee Cooling was acknowledged for its always consistent support, set up and operation of electrical power for the annual Christmas Tree. Nancy and Joe Carrington of Marco Island Florist received an award for their long time support of the Chamber and Christmas Island Style. The seasonal centerpieces were created by Gene’s Fifth Avenue Florist and a beautiful floral arrangement.

The 2011 Lifetime Achievement Award was won by Attorney William Morris. Bill, a member of a number of civic and charitable organizations, including YMCA, Marco Island Art League, American Cancer Society, Chamber of Commerce, Children’s Way. Bill and his wife, Pegilee, are the parents of seven children, five of whom are adopted from the many, many children they have fostered.

Bill commented. “We have people here tonight who have positive, can do attitudes.” He described the patience of football star, Tim Tebow, who rose above criticism and little respect from some of the “sports talking heads” to be a winner on and off the field.

“Keep it positive, don’t worry about everyone who complains because as long as there 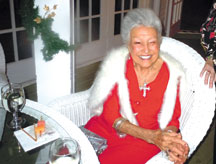 Helen Ann Federspiel, past Citizen of the Year.

are complaints, we must be doing something right!”

Steve commented that there were many others in the room who worked as hard and recalled a childhood that taught him the value of caring about others. He accepted the award on behalf of all the people in the room who helped him earn it.

The Marco Island Citizen of the Year Award, a well kept secret this year, was announced by Dave Neill, Publisher & President, Naples Daily News. His description of a man “dedicated to the rights of others and those less fortunate” enlightened the guests. A member of countless City boards, Veteran’s Community Park Planning Committee, Marco Island Fire Rescue Foundation, Lorenzo Walker Vo-Tech Center and too many others to mention. A man who has been a long time volunteer, former board member of the Marco Island American Cancer Society, a man who knows how to get to the 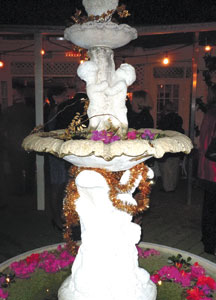 The fountain was decorated in honor of the event.

heart of the matter, define his terms “in no uncertain terms” and move forward. Had to be Monte Lazarus!

Monte, a first rate lawyer, Yale Law School grad, enjoyed a diverse career, retired in 1989 from his position as senior vice president of United Air Lines and moved to Marco Island. Then he really got to work!

There are few committees or civic and social organizations which have not benefitted from Monte’s common sense, legal expertise and work ethic that is still going 90 miles an hour. Monte Lazarus writes for this paper and our readers look forward to his stories for their clever, dry humor, never at the expense of anyone.

He will recount a simple everyday event which becomes an instant sitcom (that’s situation comedy) with poor Monte in the middle of a mini crisis. Monte has worked for non-profit organizations all his life, the United States Army, The United States Government, United Air Lines and various Marco Island boards and committees. We are proud to offer him similar employment where he continues to make no profit at all! Our readers, however, happily reap the harvest of his humor.

Coastal Breeze News applauds the Chamber of Commerce and the Naples Daily News Group for the well deserved recognition bestowed on all the honorees. As Monte said, “E pluribus unum.” Out of many, one. That’s Marco Island!