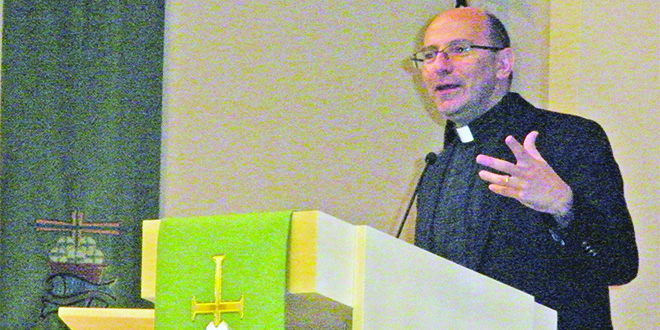 Christianity is alive and well in the land that was the religion’s birthplace: Palestine.

An insightful glimpse into Christianity’s history, challenges, scope and current status in that strife-worn territory was provided recently at Marco Lutheran Church by someone with first-hand experience, Rev. Mitri Raheb.

Rev. Raheb is pastor of Christmas Lutheran Church, located in his hometown and that of Jesus, Bethlehem, Palestine.

He is also president of the nonprofit, Bright Stars of Bethlehem, which is dedicated to promoting Christianity in the Holy Land. The organization supports the health, educational, cultural and spiritual development of Palestinians through the outreach ministries of the Diyar Academy for Children and Youth, Dar al-Kalima University and the Ajyal Senior Care Program.

In fact, “Assuring that Christianity Survives and Thrives in the Holy Land” was the title of Rev. Raheb’s one-hour-long, fact-filled presentation, which he infused with a gentle humor.

He began by noting that because of Islam’s predominance in Middle East, people may not associate Palestine with being home to Christians, although it has been since the religion’s start.

“I like to remind people that the Bible didn’t originate in the Bible Belt, but in Palestine,” he said with a smile.

Like other Arabs, Palestinians have historically been Jews, Muslims or in the case of his family, Christian, and Arabic is among the languages in which people spoke “in tongues,” as described in the second chapter of the book of Acts, explained Rev. Raheb.

“We want to make sure the good news continues to be proclaimed in Arabic,” he said.

Life in Palestine has long been difficult, given the territory’s centuries of occupation by foreign powers, from the Assyrians, to the Romans, to the Ottoman Empire and today, by Israel.

European missionaries brought the Lutheran and Russian Orthodox denominations, along with Catholicism, to Palestine in the mid-19th Century, a time when Christians made up a significant portion of the region’s population.

Rev. Raheb said their fortunes turned in the early 20th Century due to a trio of misfortunes while Palestine was ruled by the Ottoman Empire.

Ottomans began drafting Christians to fight in World War I and then slaughtered Palestinian Christians in East Jerusalem in 1917, he said. Next came the 1918 Influenza Pandemic, which swept through the region, taking many lives. As a result, many Palestinian Christians immigrated to the Americas and elsewhere to find security, so many that Bethlehem’s population declined by one-third.

The creation of Israel in 1948 saw another wave of Christians emigrating from Palestine, which is in the West Bank. Rev. Raheb said Christians comprised eight percent of Palestine’s population in 1947, and within one year, their numbers had dropped to 3.7 percent. Today, he added, Christians make up less than two percent of the population.

Rev. Raheb also discussed the challenges of life in Bethlehem, Palestine and the Gaza Strip. Travel is difficult because of Israeli restrictions that include security checkpoints and passes. And then there are the wars – he said he’s been through 10 in his 54 years – and the harassment from some fundamentalist religious opponents.

“We’re not persecuted, but life is tough,” he said.  “It’s not easy to live there, but believe me, in Jesus’ time, it was not easy either.”

Rev. Raheb said he has the ability to emigrate with his family, but that he is dedicated to making sure that Christianity continues to be a presence in the Middle East. Working to ensure justice on all fronts, conciliation among all groups, and ensuring there’s a culture that values human life, equality and tolerance are part of his larger goals.

“For me, the Holy Land remains holy if we make sure the good news continues to come out of there,” he said. “It’s up to us to make sure the religion survives there.”

For more information on Rev. Raheb and Bright Stars of Bethlehem, visit brightstarsbethlehem.org.