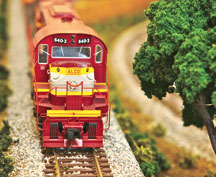 Models like the Alco locomotive are true to their life size counter parts. PHOTOS BY VICTORIA WRIGHT/COASTAL BREEZE NEWS STAFF

Having always been a history buff, it’s difficult for me to admit that there are some areas of study that I haven’t read into very much. One area in particular is the history of steam locomotives and diesel engines. Unknown to me at the time when preparing for a normal public interest piece, I would meet an inspiring Marco Island resident who would educate me more than I could have imagined via the historical accuracy, precision and detail that he put into designing and developing a real to life model train layout.

Skip Merriam, the creator and historian of this amazing train set, began his initial stages of development in early November of last year. Skip claims that “I originally started this project as a historic diorama and therapeutic activity,” even though it escalated to something much more. Everything that makes this set unique; from the impeccable detail of each scene that surrounds the train tracks to the accuracy of each locomotive engine, Skip did it all himself with tender love and care.

from Schenectady, New York, ALCO (American Locomotive Company), had its main production factory in town. Skip spent a lot of time with his father, who also had model train layouts, and would take him to their factory in order to marvel at their amazing locomotives. The era of his childhood, the late 40’s & early 50’s, was a time that shows its influences in his train scenes. This was also when steam was the standard for power locomotives.

These engines are represented on his layout and show the complex nature of how they operated during their time; including such details as the audio and correlating emission based on its type, either steam or diesel. These tiny details made each of the trains essentially as true to life as you can get. If the train on his set was carrying a large load of lumber, the train would run slowly, representing that of the workload that the engine must pull. The larger the load, the greater the

sound and the greater respective emission, either it be steam or diesel. Even the start and finish of each engine had its own respective sound.

One particular influence that shows itself on the layout was when Skip and his wife Elaine traveled to West Virginia to visit the ‘Cass Scenic Railroad State Park.’ This trip influenced him to include the ‘Shay 80-ton locomotive’ dating back to 1906, which was the main powering force of the trains they rode while they were there. When riding this train in Cass, it gave him inspiration to include this type of engine in his set. When riding the train, he was impressed with how each specific part of the engine worked in harmony to pull the massive load it was carrying as it rode up a steep mountain. At the top of this mountain was a logging operation, which was another influence that affected the design of his set.

into account all of the characters and ‘scenes’ that encompass the set. One in particular draws its influence from his Cass trip. The lumber yard has much detail, which includes the owner as well as the lazy worker nearby that has his axe near him, un-manned. As real to life as it may be, the logs from this logging area travel to the lumber mill in order to be cut and then sent to commercial lumber yards.

A logging operation and lumber yard aren’t the only scenic pieces on this set though, even though it is one of the more impressive ‘scenes’ as Skip would call it. Around the tracks that make up the railroad system, Skip designed ‘scenes’ where each particular area in the set had its own ambience. According to Skip, “designing each of these scenes was one of the more enjoyable parts of this project for me. It was as though I was watching a world come to life in front of my eyes!”

the surplus of scenes that Skip included in the set, was a ‘Meg-a-watts’ energy company; a building that is representative of the era in which this train set takes place; a time when fossil-fuel coal burning power stations were a common form of producing electricity. Both the coal and electric companies are near each other, which is an accurate display of each company’s dependence on the other. The coal mine and plant also has railroad platforms for unloading the coal. There are also numerous railroad cars which include coal, freight for fruit exchange, engine houses and passenger cars. The Country Club, which dubbed for this article as ‘BreaktTime at Merriam’s Landing’ is another important piece to the set. There is also a beach with people playing in the water and lounging on sand from Marco’s beaches, adding to its authenticity.

According to Skip, “any train layout, either it be real or on a set, has to have hobos.” This axiom is made true with one specific 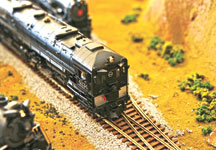 scene where a group of hobos are camped out at their shanty town, where even the fire keeping them warm flickers with illuminated light. Beyond the hobos camping outside of the trains getting ready for their next stow away journey, his detail goes as far to even have people placed on each of the trains; either as a passenger, engineer, conductor or even maintenance crew.

This train set would not be able to run if there weren’t someone there to operate it, which is another role that Skip plays. From the control unit of the set, he inputs codes that correlate with each particular locomotive. The codes are only known to him, keeping those unaware of the set and its operations from using it. For example, the ALCO diesel engine has the code 6403, which is the actual serial number of its real life counterpart.

Beyond his interest in the history and culture of trains Skip is very active as an alumnus of Colgate University, and has

been going to the Colgate vs. Cornell football games for all of his life. Tom Linville, a lifelong friend, who has attended many of these games over the years with Skip, and a graduate of the Cornell engineering school, is the wiring genius of the layout. The two schools are extremely competitive in their sports programs and are longtime rivals.

Skip is also into boating, fresh water boating specifically. His boat, a 26 foot Hackercraft made of solid mahogany named “ My Woody” is another passion, which is at his summer home in the Adirondacks of New York State.

Thanks to Skip for giving me another perspective into an industry that I have been unaware of. This information was presented in such an entertaining way that it will urge me to tell any History Professor to begin lecturing his course work using visual models that accurately explain his material, in order to make it interesting and more captivating. My understanding of the steam locomotive and diesel engine era has permanently and happily changed forever.