Chess, the Battle Game of All Ages 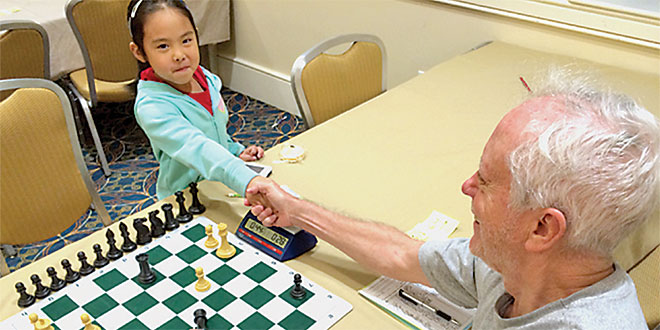 The battle was set. Round nine, the final game of the World Chess Open would begin at 4:30 afternoon on July 4. There were over a thousand players, competing in separate ratings at the Downtown Marriott in Philadelphia.

As I set up the chess pieces I was thinking, Got to have this final game. Score of 6-3 will be with the winners. Got to win.

In tournaments the computer decides who plays who based on wins/losses/draws. Posted on a board was the rigor of round nine. Quickly I learned where to sit, that I had black pieces and my opponent was Rachael Li from Texas. Also her score from the eight rounds was 5-3, same as me.

Then Rachael sat down, adjusted her chess pieces to be sure set up just right. As we were waiting for the Tournament Director (TD) to give a little speech and say, “GO”, we had a brief conversation. I learned she is 6 years old and loves chess.

Frankly, my heart was thrilled but I tried to maintain a somber appearance. Thinking at the time, Gee, here I am 70 years old and I’ve played chess for about 60 years. My opponent is 6 years old and she has played for….well, not very long. This will be an easy game!

On directions of the TD, Rachael and I shook hands and I punched the clock so the time started running for the white side. In this particular tournament each player has two hours. A player can earn an additional 30 minutes by making 40 moves in two hours. Either way, if you run out of time you lose; the game is over, regardless of strength on the board.

Rachael pushed her King pawn two spaces and punched the clock so it stopped on her side and began on my side. We both recorded the move, 1. e4

I thought for a moment as the clock ran. The King pawn opening is very common, especially with beginners. It’s true Bobby Fischer always opened with the King pawn but it seems not a big favorite with current Grandmasters. When I have the white pieces I always open with the Queen pawn, 1. d4. Anyway at this point I must respond to 1. e4. The most common black response is e5, King pawns head to head. Since 1….e5 is so expected I always prefer a more exotic response.

There are three popular defenses to the King pawn other than e5. About ten years ago I started using the Sicilian Defense. It’s good but about two years ago I switched to the French Defense. Now I prefer the Caro-Kann and therefore boldly pushed the Queen Bishop pawn to c6.

Rachael’s moves were carefully considered and expeditious. I could see she was savvy about the opening. There would not be a quick win. On 10. Bf4 she had developed her Knights and Bishops. And she had castled on the kingside. These were slightly ahead of me in development. I thought a few minutes before finally decided to grab the tempo by launching attack against the white kingside with 10….. h5.

What is tempo in chess? This is how it works. 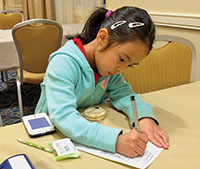 Each move has some impact on the next responding move. If you make a somewhat passive move your opponent has a wide choice of moves, searching for a good attack. But, if you successfully make an aggressive move then your opponent is very limited in possible response moves. On my 10th move I launched an attack right on the castled kingside and clearly had the tempo.

At this point Rachael carefully considered her next move. As I saw her concentration it dawned on me that this would not be an easy game. I had better buckle down. Surely I can win.

For a while I maintained the tempo but there is another very important factor for winning and that is Position.

Rachael and I were both taking long time for our moves. Her strong position was slowly inching up an attack on my King. Pressure, pressure.

Soon it was obvious I would not win but maybe can get a draw. If three moves are repeated, usually by force, that’s a draw. Or if one side has no moves and is not in check, that’s called stalemate and is a draw. I desperately searched for a draw.

But Rachael knew exactly what was going on. At age 6 she closed in for the kill. Decisive was move 28. Qc6+ when she checked my King in a way to shortly take a Rook. Losing a piece is devastating. I battled on for another 15 moves, hopelessly. At move 44 I toppled over my King and resigned.

As we shook hands I analyzed my emotions. I knew I was very disappointed and sad that I had not played better. But I noticed very different emotions.

I asked Rachael for a picture of us shaking hands. She agreed and the TD took the photo. Then I also asked her to sign my record sheet. As watching her carefully write her name in the style of a 6 year old, I realized how overwhelmingly proud I was of Rachael Li. So proud of this wonderful young chess player!

Wade Keller has started a new chess club – CHESS K-12 on Marco Island. The club is for students and meets each Saturday, 9:00 to noon in the Marco Island Library, 210 S. Heathwood Dr. For questions or comments contact Wade at 239-389-2525 or WK@KellerPublishing.com