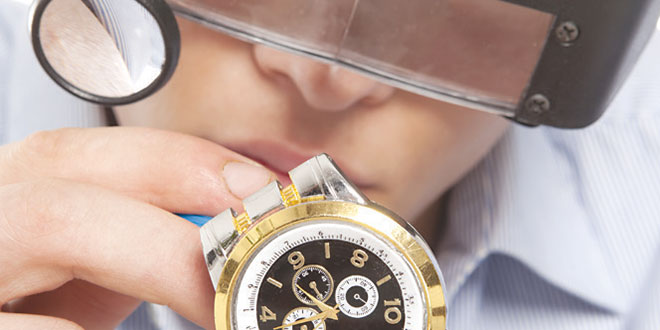 I may not speak for everyone out there, but the subject of home remedy jewelry repair reminds me of a famous quote from actor Clint Eastwood…“A man’s got to know his limitations!”

In time I learned what my limitations were; plumbing, auto repair and electrical work. What brought me to my senses was standing in water up to my ankles, a car that wouldn’t start and blown house fuses!

I pay someone who knows what they are doing, like for example, a professional plumber, auto mechanic or an electrician. Then I get it done right and hopefully reasonably.

I’m afraid the same goes for novice goldsmiths (aka… husband’s garage jewelry repair.) Ladies when you notice a piece of your jewelry is broken or needs “professional attention” and you hand it to hubby who will then trot off to the garage workshop to fix it, it is a pretty dumb idea, unless he happens to be a goldsmith.

“Dumb” you say? Take it from me, a professional goldsmith and jewelry bench repairman (45 years of experience, I’d say I’m qualified). I have yet to see a home repair go well, and then it will cost ten times what it would have cost if you had brought it to me in the first place.

Let’s just say so much can go wrong with an inexperienced repair person. A gold or platinum piece of jewelry should be repaired with like metal, not fixed with a spool of lead solder and an electrical soldering gun. The results are basically throwing the ring away, no matter the value, for once you contaminate gold or platinum with a nasty metal such as lead, it’s fatal.

I was once dumbfounded by a guy who repaired his $30K 18 karat gold Rolex presidential watch strap with lead. That mess cost him bigtime to remedy that blunder.

Super glue or epoxy is not a cure all. It may work with something you pick up at the fair or yard sale but on fine jewelry it is simply a temporary band aid, and whatever stone you are trying to secure won’t stay place very long. Plus it makes my job more difficult when everything is awash in the stuff.

I know I hear it every day “it’s so expensive to get repaired at the jewelers!” Which brings me to the oxymoron of what one would considered expensive here on Marco Island.

As most of you well know, I have owned a jewelry store on the island for close to 21 years. I have heard it all, the heart wrenching sob stories, and getting mercilessly chiseled and abused and called a bandit from one woman because I charged her $15 out of the goodness of my heart for fixing the impossible that took more than an hour of my time. Only to see her weeks later sunning herself cruising down the Marco River in a new fifty-foot yacht named after her namesake (I’ve got her number now!)

And only ten minutes later another customer asks me if I am sure I am charging enough?

A fifteen dollar charge for services rendered can either cause hand wringing, untold pain and monetary anguish for one customer or another can throw me a grateful nonchalant fifty dollar bill and tell me to keep the change. It’s like what I have been saying all these years, this island is “Mayberry with sand.”

Mind you, the hand wringing tightwads are standing in a shop that has a fully lit sign out front that says “goldsmith,” not to be confused with the word goodwill.

Do these same people stand in Tiffany’s or Cartier and tell each other this is going to be a thrifty experience? I swear, I think there has to be a competition among some residents who joyfully torment island business owners and try to see how many weeks or months they can go out, eat, drink, shop and get broken things repaired without spending a dollar. And they later compare their findings with their cohorts over free coffee and chocolate chip cookies procured from a bank lobby they don’t even do business with!

I could go on forever, don’t worry I won’t. Although it reminds me of another gem of a quote I heard the other day: “Never let anyone waste your time twice.”

What it comes down to is if you own a valuable piece of jewelry that needs attention, and in the process of trying to save a few bucks you bring it to someone who is inexperienced, it will most likely damage it or destroy it.

Sure it will cost some of your hard earned greenbacks, for proper repair. That’s true with anything valuable, we are talking diamonds, precious gemstones and gold here, and the work is being performed by experienced goldsmiths who will repair your pieces carefully, correctly and reasonably. My longevity on this island proves I must be doing all three right. Or maybe I thrive on being subjected to abuse? Who knows? Whatever the reason, it’s no wonder one may still have to take me with a grain of salt.

Truthfully, one who ignores the fact that prongs are missing, or puts off securing a loose gemstone, will result in a more expensive cure when the gem has to be replaced. A malfunctioning neck chain clasp or diamond bracelet catch can result in loss; what about correctly sizing a ring that now fits too loosely that it could simply slide off and be lost, or the same ring that fits so tightly your finger has turned blue.

There are ways to save money on jewelry repairs, by purchasing less expensive alternative metals such as stainless steel, silver or gold-filled that can be used for broken catches on bracelets or chains, even earring backs. They work just as well without being solid gold or platinum. On a good note, the cost of precious metals has dropped considerably these past weeks. If you have been waiting for that, now is the time.

I would also like to mention for those interested in a real value, I have a money-saving jewelry repair and watch battery coupon in both the Marco Island Sun Times and Coastal Breeze, good until August 21st.

Richard Alan is a Master Goldsmith/ Designer and owner of the Harbor Goldsmith of Marco Island and will answer your questions about all that glitters. 239-394-9275 or harborgoldsmith@comcast.net. Visit our website at harborgoldsmith.com