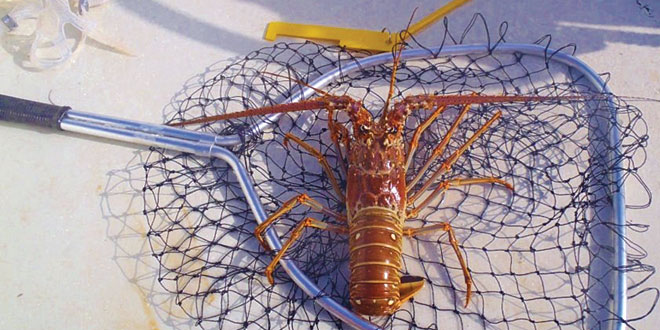 In my household, sometimes I wonder if the refrigerator calendar of the Julian twelve months is really necessary as we mark our year by seasons – not fall, winter, spring and summer – but by stone crab, sailfish, mahi, grouper, scallops and lobster seasons. That’s just the oceanic seasons for my daughters and me; my husband adds in the hunting seasons as well for his year! It is definitely unanimous that we all love Lobster Season when late July and August roll around.

Most Floridians know (and plan for) the “mini season” – two days in the last week of July each year that we can jump in the warm, calm, clear waters of the Keys and “chase tail”! Snorkeling and diving for the Caribbean Spiny Lobster (Panulirus argus), a.k.a. the Florida Lobster, in Florida Bay and the Atlantic Ocean is a season we just can’t miss. With a Florida saltwater fishing license and lobster permit, recreational SCUBA or snorkelers can collect Florida Lobsters that have a carapace (upper shell of the body) greater than 3 inches, on the last consecutive Wednesday and Thursday each July in Florida. This two day saltwater frenzy is called the lobster “mini season”.

At a minimum, participants need mask, snorkel, fins, a small handheld net, a tickle stick and a carapace measuring tool (typically connected to tickle stick). When a lobster is spotted in its hole or reef edge, the tickle stick is used to gently nudge this spiny crustacean out in the open; the net is placed strategically behind the lobster, then using the stick, tickled backward into the net. The lobster uses its large, strong abdominal tail to swim and shoot backward to escape. Scooping it in the net, the carapace is measured in the water. If the carapace is greater than 3 inches – it’s a keeper! 6 lobsters per person per day are allowed and no egg carrying females can or should 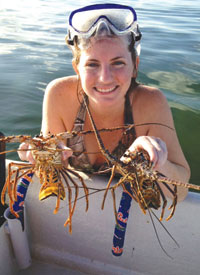 be kept. It’s a great day of diving or snorkeling. Not only the excitement of the lobster catch, but encounters with sea turtles, sting rays, many species of fish, star fish, corals, sponges and much more, makes chasin’ tail an enjoyable adventure for the whole family.

The harvest of the Florida Spiny Lobster is the most lucrative and important fishery in the state of Florida. Recreational harvests can reach 1.5 to 2 million pounds of lobster while commercial harvests can be as high as 6 to 8 million pounds making it on average a 23 million dollar fishery per year for the state of Florida. And the bulk of the catch comes from southern Florida and especially Monroe County – the Keys. Though about 90% of the catch is from Monroe County, there are lobster further north in Collier County that contribute to the commercial landings. Spiny lobster are seen on reefs off Marco Island and on hard bottom habitats found offshore. Divers have the opportunity off Collier County, of finding the lobster in the clearer water in deeper offshore reefs.

This Arthropod looks like a very large crayfish. It inhabits the patch and offshore reefs, sponge and hard bottom areas in the tropic and subtropical waters of the Caribbean Sea, Atlantic Ocean and Gulf of Mexico. They

Catch of the Day.

find holes and crevices in the limestone substrate to hide in by day and come out and hunt for its diet of mollusks, sea urchins and small crabs at night. Like its fellow Panulirus family cousins it has no large claws or pinchers, like the Maine lobster. Its color ranges from light tan to dark orange with cream colored spots on the carapace and tail. For defense, other than excellent camouflage on the reef habitat, it has large, horn-like antennas over its eyes that are used to warn off predators (and divers/snorkelers!) and a second pair of shorter antennae that sense movement and chemicals in the water. The lobster will track your every move as you move into net it! Its carapace is covered with small but abundant forward-facing spines that can easily cut and nick gloveless fishermen and ward off other predators. They spawn in south Florida in April through October. It takes a couple years for a lobster to grow to a catchable size. In the first few years of life, they do congregate in the holes and crevices of nearshore reefs then travel to larger offshore reefs as they grow larger. Some of the largest Florida lobsters on record weigh between 13 and 15 pounds.

It’s Lobster Season and time for chasin’ tail! Please remember: have the proper license and permit, always measure the lobster in the water with the proper measuring device and the bag limit is 6 per person per day. The carapace must be 3 inches or greater for a keeper. Do the right thing and put the little ones back and let them grow – the ecosystem and Florida’s fisheries depend on this!

For Florida lobster permit and catch limits, please go to the Florida Fish and Wildlife Conservation Commission website at myfwc.com/fishing/saltwater/recreational/lobster/.