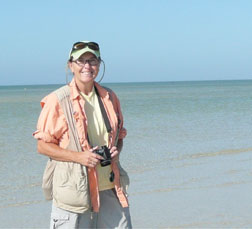 On Monday evening, February 13, Charlette Roman presented a program, “Marco’s Natural Magic,” to approximately 130 guests at the Marco Island Historical Museum. The presentation was sponsored by Marco Island’s Calusa Garden Club. Decorations were floral arrangements made by the Club in the afternoon

Ms Roman took the guests on a virtual tour of our local surroundings – the ABC Islands, Jolley Bridge sandbar, Kice Island, Sand Dollar Spit, and Tigertail Lagoon. Her beautiful pictures of these areas and their inhabitants led to many oohs and aahs from the audience.

Preceding the program a reception was held, with refreshments supplied by the Calusa Garden Club, and attended by many of those in the audience. Following her presentation, Ms Roman was surprised when she was presented with an honorary, “Friend of Calusa Garden Club,” plaque.

The Calusa Garden Club meets at 1:00 p.m. in Fellowship Hall of Wesley United Methodist Church the second Monday of the month from October through March. The program for the March 19 meeting will be “Florida’s Fabulous Crotons” by croton expert Mark Peters.