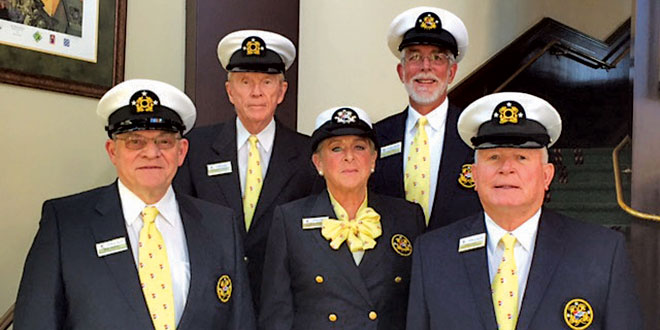 The Marco Island Yacht Club (MIYC) held its 14th Annual Commodore’s Ball and Change of Watch Saturday, January 23, 2016. Fine yacht clubs throughout the world mark this transition of leadership with pomp and circumstance. This year’s gala event was consistent with that tradition.

The Change of Watch ceremony saw outgoing Commodore Dick Irwin have his burgee lowered and Commodore Harris’ new burgee raised. At MIYC, Dick now joins the group of 14 prior

Commodores. At last night’s ceremony, five past Commodores were in attendance at the Change of Watch for the first time in the Yacht Club’s history.

Along with the rest of the new MIYC “bridge” or slate of officers, Commodore Harris was sworn into his new position in a formal Change of Watch ceremony. The officers of the bridge were resplendent in their dress uniforms with blue blazers embroidered with the club’s insignia; flag bedecked ties 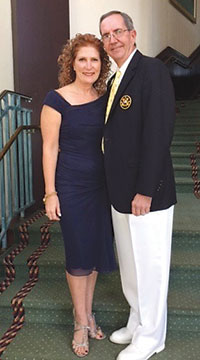 or scarfs, white shoes and slacks. Joining Commodore Harris was his wife, Laurie Harris whom he calls the “Commodorable,” although Commodore Harris did specify that he was not the first to score points with his wife that way. 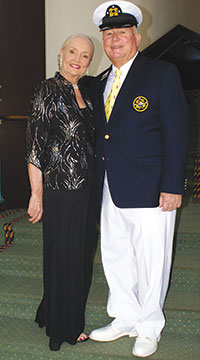 Past Commodore Dick and Sharon Irwin.

Blauw. Dave Everitt additionally serves as the chairman of the board for MIYC, in an arrangement where in the bridge handles all matters nautical, while the board takes care of the club’s business matters.

Cocktails were served at 1730 hours, or 5:30 PM for civilians, with the welcome from Past Commodore Irwin at 1830, followed by dinner and a very fun, festive evening. The evening concluded with dancing to the music of Jim Breen.

A great time was had by all!