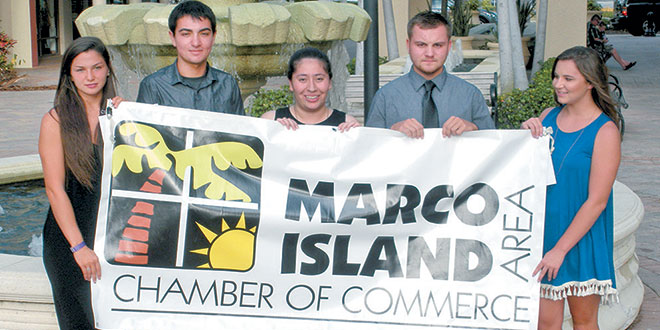 Marine biology, advertising and the fashion industry are just a few of the career paths selected by the eight recipients of the 2016 Leadership Marco Chamber of Commerce Scholarship Awards.

The winners of $18,000 in scholarships were announced at the Chamber’s May After Five, held at CJ’s on the Bay in the Esplanade Shoppes. The scholarship funds were raised by the Chamber’s Leadership Marco committee through events such as Wet Paint Live. The Chamber’s Education Committee reviews the applications, conducts interviews and selects the recipients.

Lauren Camposano – Lely High School: Will attend the University of Central Florida where she’ll major in business and marketing. Camposano is interested in a career as a buyer in the fashion industry.

Hunter Angersbach – Lely High School: Will attend Florida Southern College where he’ll major in advertising and public relations. He’s interested in a career as a creative director in the advertising industry.

Kathryn Schiller – Lely High School: Will attend Florida State University where she’ll major in political science and pre-law. She plans on a career as a criminal defense attorney.

Michael Scola – Lely High School: Will attend Florida State University. Will major in finance and economics and plans on a career in investment banking.