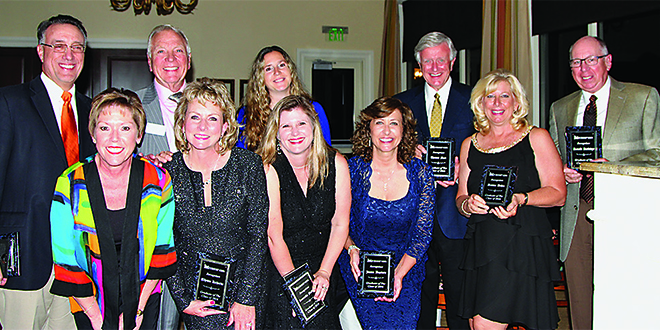 On Saturday evening, January 28, the Marco Island Chamber of Commerce held its Installation of 2017 Board of Directors and Graduation of Leadership Marco Class of 2016, at the elegant Hideaway Beach Club.

Chamber President Alex Parker III welcomed guests and spoke of what he called the “game changing” events of 2016. Parker began with a heartfelt tribute to Dick Shanahan, former Chamber president and community leader, who passed away in October 2016. He spoke of another big change that came at the end of 2016, when Executive Director Sandi Riedemann Lazarus announced her retirement after 21 years with the Chamber.

Parker advised the group, “This Chamber continues to be strong and continues to grow with solid membership, and a seasoned, experienced, and committed Board of Directors.” Parker introduced Dianna Dohm, who just two weeks prior stepped into her role as the Chamber’s new executive director.

Executive Director Dianna Dohm expressed a clear focus for the upcoming year, saying, “As we move into our fortieth year, nothing is going to distract from our mission. The Marco Island Chamber will continue to focus as a leader for businesses and entrepreneurs, a channel for connecting members with resources and as a catalyst for job and business growth.”

Through all the changes, the Chamber kept moving forward, encouraging new businesses, facilitating networking opportunities, welcoming our visitors, and contributing to the community. Last year saw seventeen ribbon cuttings/grand openings, and 73 new members. And an astounding 6,000 visitors were greeted at the Chamber office at 1102 N. Collier Blvd. Chamber employees Donna Niemczyk and Katie O’Hara, along with 30 volunteers, were recognized as being instrumental to Chamber operations and success.

Looking to the year ahead, Dohm said, “There is much to be done and the Chamber is committed to making our community stronger through our businesses.”

County Commissioner Donna Fiala administered the oath to swear in the 2017 Board of Directors.

Another important part of the evening was the graduation of the Leadership Marco class of 2016. Leadership Marco is a four-month program that educates students in all aspects of the local community, including history, government, tourism and more. Chamber Executive Director Dianna Dohm is herself a graduate of the 2016 Leadership Marco class, along with Janice Baptiste, Lenore Brakefield, Gene Burson, Angela Johenning, Samantha Malloy, Thomas Morr, Samantha Morris, Kevin O’Fee, Allyson Richards, Ronald Rutledge, and Brandi Sue Tramazzo.

Music and dancing made for a fun end to all the evening’s business.

The Chamber is busy getting ready for two exciting events. Mark your calendars for Souper Bowl on February 4 from 11 AM to 1 PM at Mackle Park and Wet Paint Live on February 16.