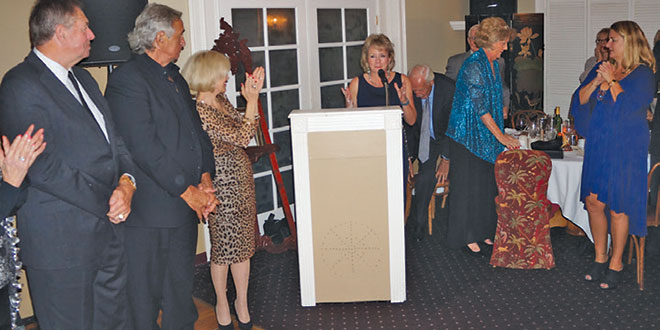 Allyson Richards addresses the crowd after being named Volunteer of the Year.

On December 6 the Marco Island Chamber of Commerce held their Christmas Gala at Bistro Soleil, and presented three annual awards.

The Lifetime Achievement award was given to Monte Lazarus, posthumously, and accepted by his wife Sandi Riedemann. Monte, an 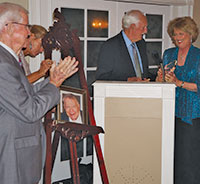 attorney, civic leader and magistrate, made innumerable contributions to Marco Island and the community. Jane Watt, founder and board chair for Marco Island Academy and author of “Fighting For Kids” was awarded Citizen of the Year. Marco Island’s Volunteer

Jane Watt, holding her Citizen of the Year award. Behind her are past award recipients, from left: Herb Savage, Dave Rice, Debra Shanahan, Craig Woodward, Dick Shanahan and George Abounader.

of the Year is Allyson Richards. Allyson is the Board President of the Greater Marco Island YMCA, and volunteers and serves on many other local boards and committees.

Live entertainment provided by the Wendy Renee Duo had guests on their feet dancing all evening long.