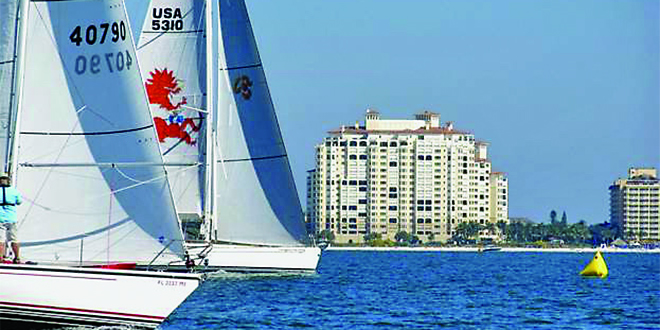 Recently, nine of Southwest Florida’s fastest sailboats gathered off the JW Marriott Marco Island Resort’s beach to compete in the Marco Island Yacht Club’s Annual Winter Sailing Regatta. The Gulf of Mexico was enjoying light winds from the east so race officials could make the first turn mark right off the beach, providing great photo ops for the beach on-lookers.

As racing continued, winds shifted steadily to the west so race officials continually adjusted course bearings and distances. This provided challenging conditions for the sailboat skippers and their crews.

Observers on the beach continually remarked, “This is beautiful!” And it was: both the weather and the sailboats on
the Gulf.

By the final race, winds had shifted to the southwest at ten to fifteen knots so that the fourth and final race could be two-times around the course.

The sailboats were divided into two classes: spinnaker and cruising boats, by U.S. Sailing certified Principal Race Officer Craig Spicer. In all, four races were held for each class. Each race course was marked by yellow blown-up markers, around which each of the racers had to sail. Boats were handicapped (similar to golf) based on their size, hull characteristics etc. This was then factored into the race results as adjustment to the actual time/distance measure. The handicap system was developed to give all boats, regardless of size, an equal chance in a multi-boat regatta. This was explained by Marco Island Yacht Club members over Marriott speakers located at regatta headquarters on the beach. Onlookers could also get information on other sailing opportunities on the Island.