Challenges Ahead for MIA Football 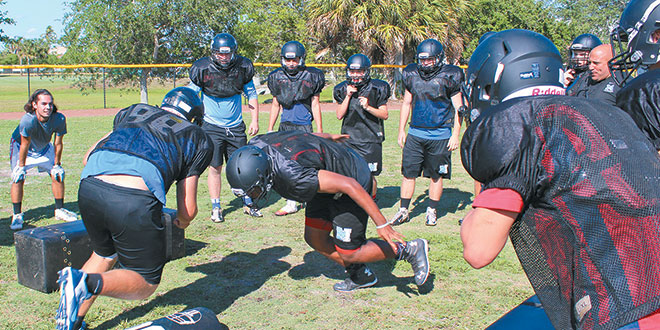 One section includes sustaining a level of success “on the field of play.”

and linemen whose jobs have to be filled.

Gresham is vying for quarterback with Hunter O’Neill and Matt Grille. Bon Dees looks to be a receiver, quite different from a key lineman on last year’s defense. Ginther will be the key on the line along with Roche, while Gross and Moeller will be returning running backs.

It appears the front line on both 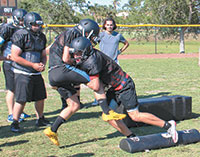 sides of the ball will be smaller than a year ago, but that doesn’t bother Coiro.

“I am not concerned about size. For me it’s simple, I want them to be fast and fly to the ball,” Coiro said. “ A great attitude and doing the right things equate to winning.”

If desire and competitiveness are elements needed, the team showed them in a stringent one-on-one tackling drill. The object was to have a ball carrier try to 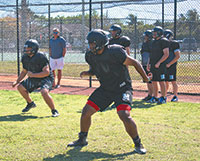 get by a defender.

All showed aggressiveness. Half way through the drill, fired up players were calling out teammates, challenging them to try and run through them.

Coiro talks about the team being part of a legacy for the next that come along. He brought over two soon-to-graduate players, Cayden Couture and Tyler Wallace.

“You are playing for these guys and those to come after you,” Coiro said. 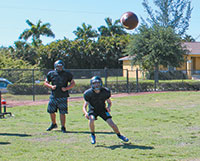 Eric Firemen has his eyes on the ball.

May 14, all to gain a family feeling.

Also acknowledged were O’Neill, who will be a congressional “young statesman” in Georgetown, and Gresham who will go to a Rotary leadership camp at Florida State University this summer.

Before each practice Coiro asks players to talk about what being on a team means.

“Place team first, be selfless,” the players chimed in.

The Manta Rays travel to St. Andrews in Boca Raton for its spring game at 7 PM on May 20.