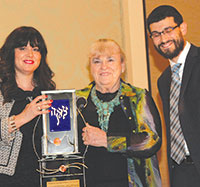 The Chabad Center of Naples celebrated its 10th anniversary year at the Ritz-Carlton Tiburon, featuring “An Historic Evening” as the theme.

Dr. Arthur (President of Chabad) and Ellen Seigel planned and managed every detail of the event with a committee of 36 people, who assisted in helping things run smoothly for almost 1,000 guests, including local politicians from every level of government.

Part of the evening was dedicated to honoring Liddy and Daniel Sexton for their ongoing generosity and support of Chabad’s Preschool of the Arts and to Carol Glassman as the 2014 Chabad Benefactor.

The Keynote Speaker of the evening was the gracious Eva Schloss of London, England. Eva is a Holocaust survivor and the stepsister of Anne Frank.

Guests had their photos taken with Eva and were presented with an autographed copy of her latest book, “Eva’s Story: A Survivor’s Tale by the Stepsister of Anne Frank.”

The air was vibrating with energy and goodwill as Chabad Partners feasted on elegant hors d’oeuvres and enjoyed a heartwarming social hour.

Rabbi Fishel Zaklos formally opened the evening and was followed by his wife Ettie’s greetings to the family of Chabad Partners. They recalled their first 10 years in Naples and how their remarkable success has resulted in their bursting at the seams for space and the need for contributions and funding to enable them to provide the kinds of services needed for the growing community. There were architectural plans for future expansion on display, and everyone was asked to consider a pledge.

The Rabbi and Ettie spoke with 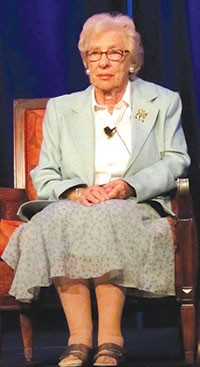 Holocaust survivor, Mrs. Eva Schloss, saw the best and the worst of humanity.

appreciation of Liddy and Daniel Sexton and their ongoing support of Preschool of the Arts, as they presented them with an award.

Dr. Arthur and Ellen Siegel were presented with a token of thanks for their ongoing assistance and for co-ordinating the entire evening.

Rabbi Zaklos introduced the 2014 Benefactor/Honoree Carol Glassman, telling how they met and speaking with great emotion of her late husband, Alex, and the growth of their ongoing relationship. He explained that Carol had not only stepped forward to fund a much-needed classroom for the preschool in the summer of 2013, but had since decided to accelerate a substantial pledge and donate it to Chabad as soon as possible rather than as a bequest. The Rabbi and Ettie then presented Carol with a stunning Rosenthal Tzedakah (charity) box. In a surprise announcement, he said that Chabad of Naples henceforth would be called “The Alex And Carol Glassman Chabad Naples Jewish Community Center.”

Carol responded with gratitude and thanks, promising, “The best is yet to come.” She also urged others to follow her lead if possible: “The future is now,” she said, encouraging others to give now rather than wait to leave a bequest.

The guests were then ushered into a large tent where the crowd swelled to approximately 800 to hear Eva Schloss speak. The large audience included a group of students from local schools who were given complimentary tickets to attend the event and have an opportunity to hear history first-hand from a survivor. 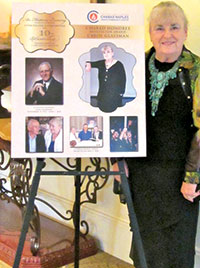 German invasion and the Holocaust but also the origins of the song “Ani Ma’amin,” there was a tribute by two very fine musicians, a pianist and violinist, from the Naples Klezmer Group. Rabbi Zaklos introduced Eva, who was greeted by Naples City Councillor Bill Barnett. He presented her with a proclamation and the key to the city.

“You will have trouble getting rid of me,” Eva quipped, “now that I have the key.”

She spoke in interview format with Tyler Korn, a local attorney. The air remained charged but in a different way. Silence fell over the audience, and barely anyone moved for almost 90 minutes, as Eva told her heart-wrenching story of hiding, betrayal and survival.

Born in Austria but relocated to Holland during the outbreak of World War II, Eva and her family were neighbors of the family of Anne Frank, and like the Franks, hid from the Nazis for several years until they were betrayed and taken to a concentration camp. Both her father and her brother were killed, and she and her mother suffered unbelievable indignities, starvation and terror.

Eva was just 15, and emerged after the war with only her mother, scarred by her experiences and, as she related, with little will to live. A neighbor who had suffered similarly, losing his entire immediate family, helped her to focus on living and to try to see the good in people. That man was Anne Frank’s father, Otto, who later married Eva’s mother, and thus became her stepfather (and had Anne lived she would have been

her stepsister). Otto Frank found his daughter’s diary and claimed that it made him feel as if part of her survived.

Eva promised a somewhat happy ending to the story, and learning that she had married, had three daughters and lives in London, was that happy ending.

She then replied to questions from the audience. She was somewhat saddened when she spoke of the senseless brutality and indignities that are still enacted on innocent people today, and reacted with disbelief at recent accounts of books relating to Anne Frank being destroyed in Japanese public libraries. She said she has visited Japan where she was always welcomed, and people there seemed to honor Anne Frank.

Everyone could benefit from her final, hopeful words of the evening: “We all have to work together to create a happy and safe world.”

The evening ended on a cheerier note as entertainer Jamey Turner played an assortment of Jewish melodies on his Glass Harp — a collection of crystal glasses filled with different levels of water.

As one guest said, “The 10th anniversary celebration was a grand mixture of storytelling. Eva Schloss used the evening to tell her personal story. Chabad’s story was more profound because the meaning won’t appear for years — not until today’s Pre-school children form their public lives.

“The Alex and Carol Glassman Chabad Naples Jewish Community Center and the Preschool of the Arts, through its teachers, is vital to a child’s wellness and a key aspect of the celebration of life that now, because of your decision, is a key part of ‘Where there is love, there is life.’”