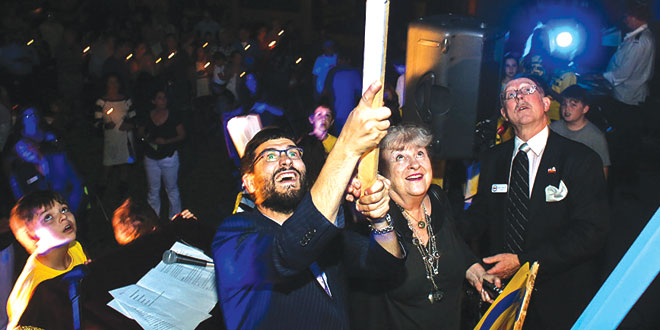 “Rabbi Zaklos never fails to amaze,” said Councilman Bill Barnett of Naples, as he welcomed the hundreds of people from Naples, Marco Island and the surrounding communities who had gathered at Chabad of Naples on the seventh night of Chanukah (Tuesday, December 3). Barnett met Rabbi Zaklos and his family when they arrived in Naples 10 years ago beginning with “nothing”. Now, he said, to everyone’s amazement, heads a large, successful congregation in a beautiful building with a successful preschool, Hebrew school and summer camps, and will soon open a mikveh (ritual bath) — the only one in this area.

Mayor John Sorey agreed with Barnett, seeming to be very grateful that this year he didn’t have to be carried up in the air 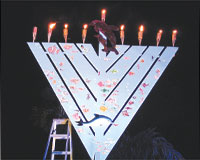 The unique Menorah blazes against the night sky of Naples on the seventh night of Chanukah – just one more to go! We can only imagine what next year will bring!

on a scissors lift to light the Chanukah candles. A very high ladder seemed challenging but a little less daunting, he said.

Each year, the Naples Rabbi presents the community with yet another unique Menorah to commemorate this festive holiday, and this year was no different. In collaboration with resident master artist Maurice Tordgman, this year’s 20-foot tall, 16-foot wide Menorah was created by students of Chabad’s Preschool of the Arts, and was covered with sea life and topped by dolphins.

Chanukah is all about light — bringing light/enlightenment to the community —and Chabad certainly succeeded.

For the first time in Naples history, the evening began with a Chanukah Parade of Light, involving approximately 100 cars bearing lighted Menorahs, some of them broadcasting traditional music. Guided by the 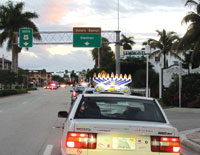 It takes a lot to stop traffic in Naples — 100 well-lit cars in a parade guides by the Naples Police Department will do it!

Naples Police Department, the parade seemed to please many startled bystanders in cafés on Fifth Avenue or some walkers who stood at the side of the streets waving and calling “Happy Chanukah” to the drivers. As a bonus, Naples Luxury Imports donated the use of a 2014 Aston Martin Vanquish, a 2014 Maserati Ghibli, a 3014 Maserati Quattroporte, a 2014 Rolls Royce and a 2014 Bentley Flying Spur, allowing two of them to be driven by winners of a raffle. Also participating were some antique cars, and as Rabbi Zaklos said, it was an equal opportunity parade welcoming automobiles of very size, shape, color and religious persuasion.

Following the lighting of seven candles, the audience was treated to songs by the Chabad Hebrew School students. As 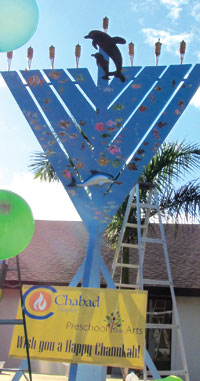 Artist Maurice Tordgman guided the Chabad Preschool students in making this unique Menorah for Chanukah, covered with fish and sea life. It is about 20 feet tall and 16 feet wide.

Ettie Zaklos, director of the Preschool, said, “What could bring more light to your life than your children!” Then everyone visited the various booths assembled around the Chabad campus to a background of live music, singing and dancing. Of course the traditional potato latkes and special sufganiot, the delicious filled donuts, were available along with crafts and activities and a jump house for the children.

With Chanukah and Thanksgiving arriving at the same time this year, and the promise that this situation won’t occur for another 57 years, according to the Judaic calendar, it seemed significant to enjoy each holiday separately and as much as possible.

For once, the streets of Naples did not roll up quietly at the usual hour, but were treated to sharing the enjoyment of this joyous holiday celebration.