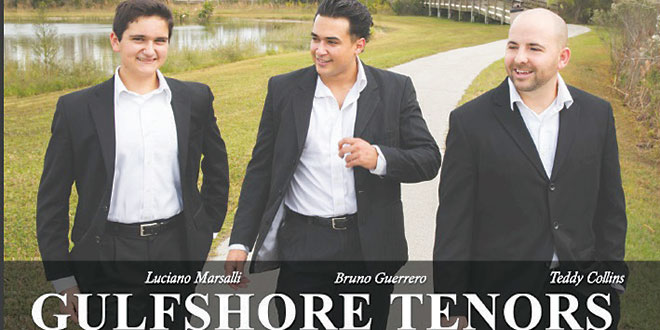 The Gulfshore Tenors to perform at the Marco Island Center for the Arts. SUBMITTED PHOTO

The Marco Island Center for the Arts announced today the first intimate concert in its Musical Interludes Series to be held at the Center on November 5, 2015 at 5:30 PM. The evening will feature the Gulfshore Tenors, consisting of Luciano Marsalli, Bruno Guererro and Teddy Collins. The Gulfshore Tenors is a new group in the style of such famous “3 Tenors” as Carreras, Domingo and Pavorotti. The talented Gulfshore Tenors will be joined by soprano, Natalia Salazar.

These artists have been performing together for several years, but only this year formed the grouping to appear at Marco Island Center for the Arts. They have been training all summer to hone their talent and ensure the evening’s performance will be one to remember.

The program will include a broad variety of music including well-known classics originally performed by Andy Williams and Elvis Presley, light opera and excerpts from La Bohème and La Traviata.

In the words of director Hyla Crane, “This will be a great program with performances to please both the opera enthusiast and those with primary musical taste running to the popular artists of the 60’s and 70’s.” The concert will be the first in the Center for the Arts’ Intimate Concert Series. Featured performances in 2016 will include: The Serafin String Quartet on January 21, Bob Zottolo Jazz Trio on January 24, Peter and Will Anderson Jazz Trio on February 12, Rebecca Richardson Jazz Trio on February 21 and Violinist Jeff Leigh on March 10.

Tickets for each evening are only $25, and may be obtained by visiting the Marco Island Center for the Arts at 1010 Winterberry Drive in Marco Island, which is open from 9:00 AM to 4:30 PM, Monday through Friday, or by calling 239-394-4221 or by visiting the website at www.marcoislandart.org. Tickets are available on a first-come first-served basis, and are expected to sell out.