Center for the Arts January Exhibits 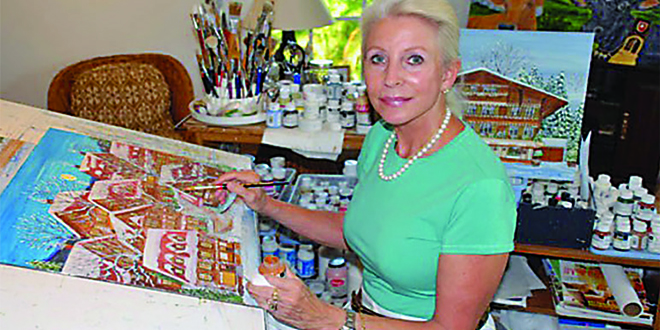 The Marco Island Center for the Arts January exhibit features the art of Betsy Ross Koller. The exhibit will include a broad sampling of Betsy’s flower and alpine motifs, based on her years in Switzerland. The exhibit will also include work displaying idyllic charm of rural Ohio, where Betsy was born and raised.

Private collectors own most of her originals, but Betsy’s reputation in the public is well documented. UNICEF has regularly chosen Betsy’s work as a featured artist in the UNICEF Christmas card collection. In 1996, “Buchanan Square” was chosen from works submitted by hundreds of artists as the featured cover of UNICEF’s 50th Anniversary Edition Catalog. Betsy’s paintings were also chosen by Nestle Corporation for its winter 1999 and 2000 Premium Chocolate Gift Box. The paintings contributed to exceptional sales success, which resulted in Nestle repeatedly using Betsy’s works for their holiday packaging.

Rosemary Wick, president of the Marco Island Center for the Arts is effusive in her praise for the art of Betsy Ross Koller. “This exhibit is a rare opportunity to enjoy the work of an extremely talented artist. Betsy’s art has been exhibited in Europe and internationally. This will be the first time exhibited in Southwest Florida. We are lucky to host this artist and this exhibit is one that should not be missed,”
said Wick.

Those wishing to get to know the artist on a more personal level will have opportunity at an Artist Talk with Betsy Ross Koller on January 17, 2017 at 5:30 PM. Betsy will provide insight into her painting, technique and inspiration in the intimate setting of the Center for the Arts. 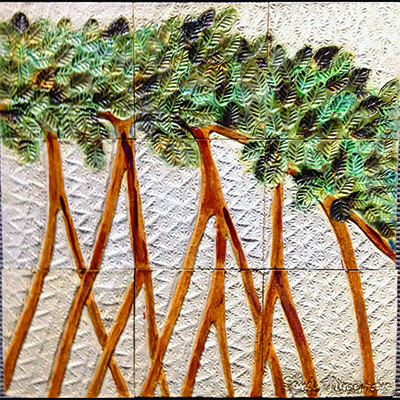 Attendees will have the opportunity to interact, ask questions and become immersed in the world of this outstanding artist. The Artist Talk is free, but reservations are suggested due to limited seating. Reservations may be made by calling 239-394-4221.

In addition to the work of Betsy Ross Koller, La Petit Galerie will feature the pottery of Sandy Moore Howe. Sandy began working with clay in 1968 at the University of North Carolina and continued with a two year Pottery and Glaze Chemistry Program at Brooklyn Museum School. She is a founding partner of 78th Street Pottery in Manhattan. Sandy has honed her clay art as she worked in such diverse environments as Ibiza (off the coast of Spain), Korea and now calls Marco Island her home.

Sandy has exhibited internationally in one-woman shows, festivals and gallery exhibits. In her own words, “I have a way with clay…I love the way it responds to my touch when I am in harmony with the material and the making.”

These exhibits run through January 27, 2017. The Center’s Second Tuesday art reception celebrating these artists will be held on January 10, 2017 from 5:30 PM to 7 PM. As always, the reception will include a bountiful buffet and libations for attendees. The public is invited, but non-members are asked to make a donation of $10 to help defray the cost of the reception.