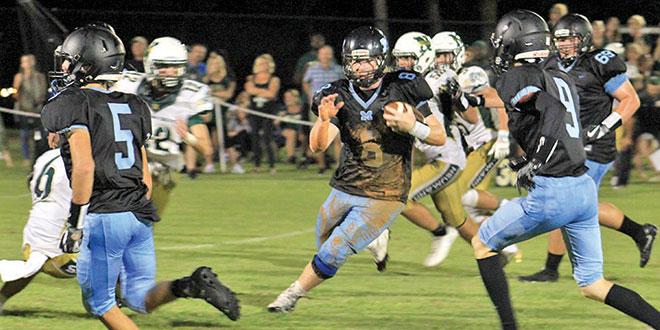 Marco Island Academy lost to St. John Neumann in a ruggedly fought football game, 31-21, that dampened a part of its homecoming week on Friday, September 23.

By the end of the game, referee flags were flying as emotions got the better of both teams.

The Rays coach Damon Coiro wanted his team to get off to a fast start, which they haven’t been doing. It didn’t look good when the Celtics scored first. The extra point made it 7-0 after just 90 seconds into the game.

and shred tacklers for a 79-yard touchdown jaunt. When Moller made good on a two-point conversion the Rays were ahead, 14-7, after one quarter.

When the Celtics Stanley Thompson ran for a 12-yard score and Tevon Petit made good on a two-point conversion the Celtics took the lead, 21-14, as the second quarter ended.

Jones hooked up with Ross Zepeda for a 75-yard pass play for a touchdown and the extra point put MIA in a 28-14 hole in the third quarter.

But MIA scored when the Celtics 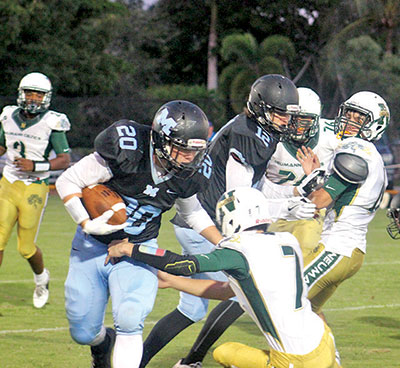 punter saw the ball soar over his head and the Rays tackled him on the Celtics one-yard line. Moller scored and Josh DaCruz’s extra point kick made it 28-21 as the third quarter ended.

The fourth quarter saw each team mount drives, but penalties and solid defensive plays didn’t change the score until 4:14 left in the game.

After back-and-fourth penalties, the Celtics Juan Pablo Pinilla made good on a 22-yard field goal to end the scoring.

MIA’s Bon Deese also blocked a field goal try. Late in the game Deese went from tight end to tackle to strengthen the defense. Kyle Ginther was a stalwart on the defensive line. Quarterback Matt Grille, Moller and Gresham led the offense.

The Rays host First Baptist Academy at 7 PM on September 30.