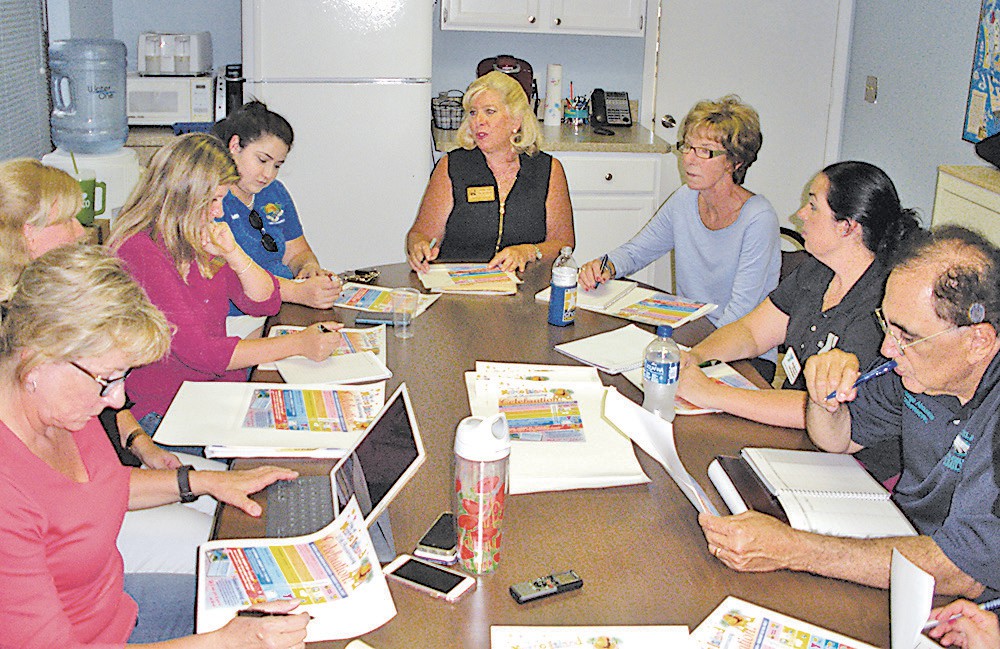 Fun for all ages accented by a dash of local culture and history will be at the heart of the City of Marco Island 20th Anniversary Celebration.

Events will be held daily, from 4 PM to 6 PM, August 22 through 28, with the exception of August 27, which will be an off day. On each day, festivities will be held at the one of the organizer’s locations, with the history museum and MICA team up for a joint event.

Representatives of each organization met recently to narrow down plans for the anniversary celebration. The final roster of events is yet to be determined, but Dianna Dohm, the executive director of the Marco Island Area Chamber of Commerce, is pleased with where the process stands.

“It all sounds great,” she said near the meeting’s conclusion, “When we first started, we were all wondering, ‘What are we going to do?’ Now it all sounds so wonderful.”

The Chamber, which is celebrating its 40th anniversary this year, will kick things off on August 22 at its offices, located off N. Collier Boulevard.

Dohm said there will be an open house that includes a “fun-facts trivia contest about Marco Island,” giveaways and light snacks, in partnership with The SpeakEasy.

“Really, it’s all about getting to know Marco, that’s our focus,” she said. “So whatever we can do to promote Marco, whether it’s a trivia contest or little giveaways.”

The following day will be marked by activities at Tommie Barfield Elementary School, Marco Island Charter Middle School (which observes its 20th anniversary this year), and Marco Island Academy.

The Marco Island Center for the Arts will be up next with an open house on August 24.

“We’re all about the arts,” said Hyla Crane, the organization’s executive director. “We’ll have three of our artists doing demonstrations so you can come in and watch a live art experience happening, light refreshments and some giveaways. I’m also contemplating setting up some live chalk art outside so that there is an interactive art project happening.”

Crane said the creation of a stretchedcanvas birthday card for the city that people “can add to artistically” is also being considered. The card would be suitable for framing and the idea elicited an enthusiastic response from the other organization representatives.

“It wouldn’t just be signatures,” she added. “We’re going to give people a chance to collage or to paint. There is creative talent in all of you.”

Informal plans call for an open house, facility tours and more on August 25 at the Greater Marco Family YMCA, which observes its 40th anniversary this year.

Stephanie Pepper, the Y’s family services manager, said the fitness staff will also provide demonstrations of adult exercise classes, and there will be art and other children’s activities, aquatic activities and healthy snacks.

“I’m sure we’ll keep adding to it,” Pepper said of the Y’s activities list.

The History Museum and MICA, which observes its 50th anniversary this year, will hold their joint program on Aug. 26,

Museum Manager Jennifer Perry said there will be a reception and nine of the museum’s historical re-enactors will portray important characters from different eras of America’s past. There may also be some child-friendly activities, she added.

Ruth McCann, MICA’s executive director, said the organization will have a table at the museum, but the exact details of activities are still being determined.

The city will hold its events on the date of Marco Island’s incorporation, August 28, at the city government’s campus, located off Bald Eagle Drive. Festivities will move to firehouse bays if it rains, said Samantha Malloy, the city’s manager of parks, culture and recreation.

Malloy said there will be music, hot dogs, chips, soda and water, representation by every city department, and the parks and recreation department and the racquet center will have games for adults and children, with prizes.

All the organizations, aside from the schools and the city, will include geocaching, hunting for and finding a hidden object using GPS coordinates posted on a website, as part of their activities.

In preparation for the celebration, artist and Marco resident J.J. Stinchcomb has designed a new logo and street-banners for the city to be used throughout the remainder of the year.

To publicize the celebration, flyers are being prepared that will be placed around town and at locations along the State Route 951 corridor. The organization will also utilize their websites, email blasts, newspapers, Eye on Marco, 98.1 FM on Marco, the Chamber’s monthly After Five gatherings and other means to spread the word.