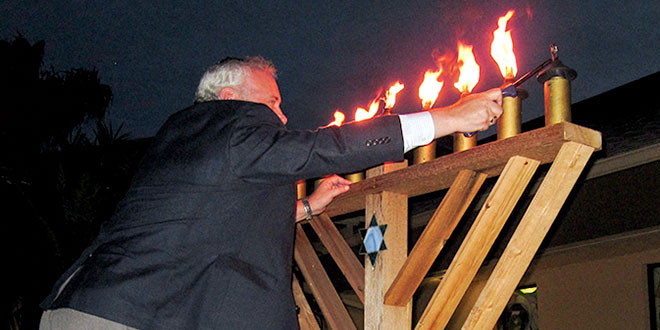 Chanukah is not the “Jewish equivalent of Christmas,” but because we American Jews are so assimilated into American culture, many customs of “the Christmas season” have been incorporated into the manner in which American Jews celebrate this holiday.

Generally, Jewish families celebrate by lighting the Chanukah candles, eating delicious treats and giving gifts to their children. After all, with all the gift-giving going on around Christmas, we wouldn’t want our children to feel that they aren’t eligible to receive gifts simply because they are Jewish. So, quite understandably most Jews joined in the spirit of the season by giving gifts to their children and grandchildren.

It’s ironic that historically the story of Chanukah celebrates a revolution against suppression of the Jewish faith and resistance to assimilation. So, what is Chanukah all about from an historical and religious perspective?

In the second century B.C., a group of Jewish fighters known as the Maccabees stormed the second Jewish temple which had been defiled

by forces of the Greek king Antiochus IV, who had persecuted the Jews and severely oppressed them. Ultimately, Antiochus began to massacre Jews, ordered the defilement of the sacred Jewish temple, and prohibited the practice of Judaism. Incidentally, the famous Western Wall in Jerusalem — the holiest Jewish site — is the remaining wall of the ancient temple.

A Jewish leader named Judah Maccabee emerged to lead a rebel force which came to be known as “the Maccabees.” He led a revolt against the harassment of Jewish people and the assimilation of the Jews. The revolt succeeded and resulted in the rededication of the temple.

The fact that we have blended the tradition of gift giving into our Chanukah observance and celebration makes this holiday even more wonderful, but it is important that we stress the message of Chanukah, which is religious freedom — not just for Jews but for all people. It is incumbent upon us to tell this story to our children. 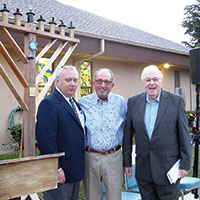 “borrowed” from our Christian friends and neighbors is the celebration of Chanukah with outdoor displays. While nothing compares with the spectacle of lighting an outdoor Christmas tree, the Jewish Congregation of Marco Island holds an annual lighting of our large menorah (the eight branch candelabrum) on the front lawn of our temple. This year the ceremony took place on Sunday, Dec. 21.

The symbolism of the eight candles recalls a minor miracle. The eternal light which shines above the ark holding the Torahs is never supposed to go dark. When the Maccabees successfully defeated their oppressors, part of the temple rededication process was to rekindle this light. They dispatched individuals to get oil since they only had a one day supply of oil on hand. This task required eight days. The one-day supply of oil miraculously lasted for all eight days, and the lamp remained lit for the entire time.

We wish our Jewish friends a Happy Chanukah, and we wish our Christian friends and neighbors a very Merry Christmas!