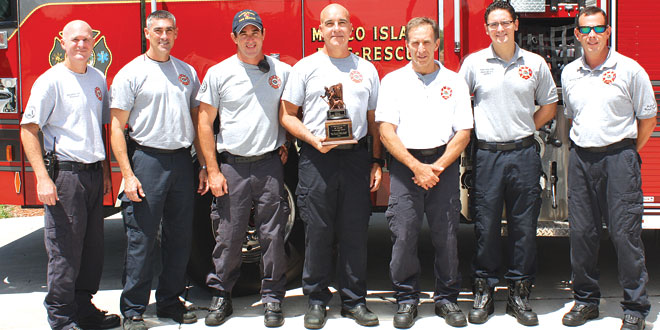 It was a silver anniversary celebrated with a bronze award.

Captain Paul MacMillan of the Marco Island Fire and Rescue Department celebrated 25 years of service with his fellow comrades on August 30. Gathering with his squadron, his wife Dana, Fire Chief Murphy, Deputy Chief Byrne and many other members 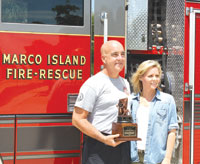 Captain Paul MacMillan holds his award of appreciation with his wife Dana at his side. PHOTOS BY NATALIE STROM

of the department, MacMillan received a handsome trophy in honor of serving the City of Marco Island for 25 years. With no plans of retirement, MacMillan will continue his role as one of Marco’s bravest.

Coastal Breeze News congratulates Captain Paul MacMillan and extends a heartfelt thank you for his unyielding service to the community.