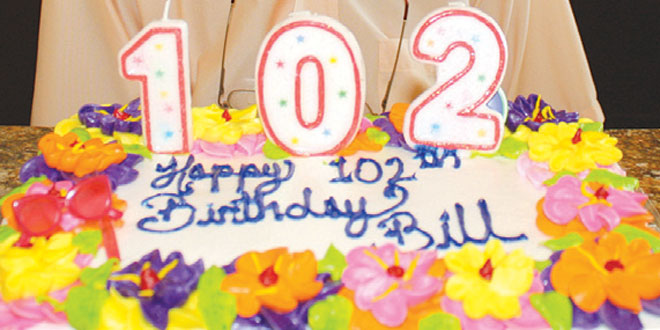 Every morning, Bill Tiley woke up at the crack of dawn to prepare for a day of grocery deliveries. His father, William F. Tiley, owned Tiley grocery in Tamaqua, PA, and he expected his son to help with the family business. Bill was around 10 years old. It was 1921. Bill, known as “Grandpa Bill” to many Marco Islanders, recently celebrated his 102nd birthday on June 28, 2012. At his party on Marco he shared many personal stories as well as his secret to longevity.

One of his earliest memories, was of course, working for the family store. Only 13 years after the invention of Henry Ford’s Model T, and on the cusp of the major change into the era of the automobile, Bill delivered groceries by pony and wagon. “Every morning, I would get up and feed the pony, take care of it and get it ready for the day’s delivery,” he stated at his birthday bash hosted by friends, Jan and Pat Zilch.

The Zilch family moved in next door to Bill and his daughter, Dana Cleary, on Marco in 2005. Dana had been living on Marco for 35 years. After her mother, and Bill’s wife, Virginia, passed away that same year, Bill moved to Marco to live with his daughter. 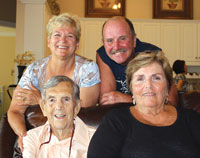 Bill and Dana moved to Wesley Chapel, but to celebrate his milestone birthday, they came back to Marco. Friends of Bill’s came to the bash – having met him at many different places around town. Many knew him through Dana, the Marco Lutheran Church or by meeting him on his daily walk to Walgreens.

His daily walk was his exercise routine. After all, Bill has been active in sports his entire life. “When I was a youngster I was overweight. The football coach saw me in the hallway… and he brought me to the locker room and gave me a pair of football shoes, and I started playing,” explained Bill.

His honed football skills earned Bill a full-ride sports scholarship to Temple University in Philadelphia. His coach was Pop Warner – a man whose legacy lives on through the Pop Warner Youth Football and Cheerleading Camps. Bill’s dreams of becoming a Physical Education teacher slipped away his sophomore year when he broke his shoulder, losing his scholarship.

At home and feeling defeated, his mother set up an interview for him at the Allentown Newspaper as a cub reporter. With zero experience under his belt, to Bill’s surprise, he got the job. It was 1934. “I started out in the basement, you see. We would work from early in 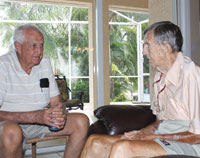 the morning until midnight at least to get the stories out. Then we’d wake up early and do it all over again.” All this at a salary of $18.75 per week.

“Dad used the two-finger type method on his typewriter,” recalled Dana. “We tried to get him to use a computer but he was too heavy handed for the keys!” Needless to say, Bill has yet to make his own Facebook page.

He did, however, make his way up the ranks at the Allentown Newspaper. Working in Lansford, PA, Bill did everything, from reporting to circulation to sales. His knowledge of the business eventually landed him the tile of Bureau Chief. “That’s what you would call the Editor of a newspaper today,” he stated.

Bill stayed loyal to Allentown until he retired in 1977 and uprooted with Virginia to Sun City, AZ. It didn’t take long for the couple to begin volunteering for the PGA and LPGA tournaments often hosted in Arizona. Working as volunteers, Bill would be in the media tent, meeting famous golfers such as Arnold Palmer. He and Virginia also enjoyed traveling in an Airstream as Bill took on the position of Editor of Airstream Association publication.

But golf became his true passion while in Arizona. The sport itself brought comfort and enjoyment to Bill. “It’s 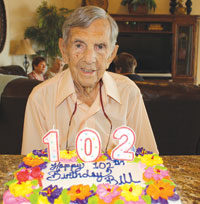 hard to believe for some people, but it is just so nice and relaxing to me.” The avid golfer hit his last hole in one two days before his 96th birthday. Bill only recently gave up the sport due to his doctor’s recommendation.

Swimming was another love of Bill’s. He trained for many swimming events throughout his life, starting with the desire to complete a marathon swim in Montreal.

Then there was skiing. Born in the northeast, Bill and Virginia loved to ski. After their move to Arizona, they continued to travel back north to ski. He wrote for the Eastern Ski Writers Association, going to different ski locations and chronicling his experience. Not a bad gig.

Bill is still enjoying life, living with his daughter Dana. His son, Dr. Fred Tiley lives in Salem, OR with three of Bill’s grandchildren. Dana also has three children. Bill’s six grandkids have given him ten great grandchildren; the eldest is 17.

Bill credits his long and blessed life to exercise, “and red wine. Lots of red wine!” he joked.

“It’s hard to believe that I get to sit here now and talk about the wonderful life I’ve had and all the different places I’ve been. My whole life has just been one development after another. Doors just opened and I went through them.”