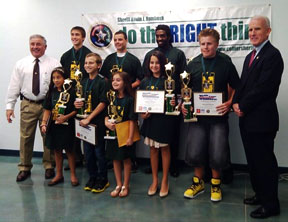 Heroism and positive decision-making were recognized during the first “Do The Right Thing” awards ceremony of the 2012-13 school Monday at the Lorenzo Walker Institute of Technology.

The Collier County Sheriff’s Office adopted the “Do the Right Thing” program in January of 1988, and has honored hundreds of children for acts that reinforce good behavior, positive acts, and outstanding accomplishments in the community.

The following students were recognized for October:

Richard Wiegold, 11th grade, Gulf Coast High School (Overall Winner)
While going door-to-door collecting funds for his football team, Richard heard someone yelling for help inside one of the homes he approached. He went inside to find an elderly man lying on the floor with a broken hip. Richard contacted emergency services and waited with the man until help arrived. It was later discovered the man had been on the floor for nearly eight hours before Richard arrived.

Jackson Bonar, sixth grade, Oakridge Middle School
Jackson was riding the bus home one afternoon when the driver suddenly had a medical emergency and lost consciousness. He managed to prevent the bus from hitting a tree by grabbing hold of the steering wheel until it came to a complete stop.

Bradley McNabb, eighth grade, Gulfview Middle School
Bradley was near his swimming pool when he noticed his 1-year-old brother had suddenly disappeared. He then saw bubbles in the pool and immediately jumped in to retrieve his brother and save him from possibly drowning.

Ana Lopez-Garcia, sixth grade, Pinecrest Elementary School
Ana was babysitting her siblings when she heard a loud banging noise at the front door and saw an unknown man walk into her living room. She confronted the man, telling him to leave or she would call the police. He left and she called for help. With Ana’s assistance, deputies were able to locate and arrest the man for breaking into her home.

Emma Rodriguez, first grade, Pelican Marsh Elementary School
While drinking from a carton of milk in the school cafeteria, Emma noticed it had passed its expiration date and notified the cafeteria supervisor. Upon further inspection, the supervisor learned that one of the milk carton cases contained expired milk and immediately disposed of it.

Bryce Foggin, eighth grade, Pine Ridge Middle School
Bryce was playing football with friends on the school’s basketball court when one of them fell and hit their head on a chain link fence, causing a severe injury. Foggin immediately placed his hand on his friend’s head to prevent any further bleeding until help arrived.

Elena Martens, fifth grade, Pelican Marsh Elementary School
Elena has always helped take care of children as her mother operates a child-care service. She goes out of her way to learn more about child care by recently attending the American Red Cross’ Babysitter Boot Camp and became CPR and First Aid certified – making her the youngest child in Collier to become certified by the Red Cross.

Bianca Perez, fifth grade, Sabal Palm Elementary School
Not only did Bianca call for help when her grandmother injured herself due to a fall, she took charge of the situation by helping to calm her grandmother, grandfather and 9-year-old brother while waiting for emergency responders to arrive.

Rashod Jules, 11th grade, Lely High School
One of the staff members at Lely High School was struck by a student while trying to break up an argument in school’s courtyard area. Rashod came to that staff member’s aid by holding onto that student to prevent them from hurting anyone until deputies arrived.

Jeremy Falvey, 10th grade, Lorenzo Walker High School
Jeremy was a major help to deputies while at the scene of an accident with injuries. He and two friends were riding ATVs in Golden Gate Estates when the friends were struck by a car and fell from the ATV. Jeremy not only helped direct traffic until deputies arrived, he also contacted his friends’ parents, used his shirt as a tourniquet and assisted the Florida Highway Patrol troopers with their investigation.