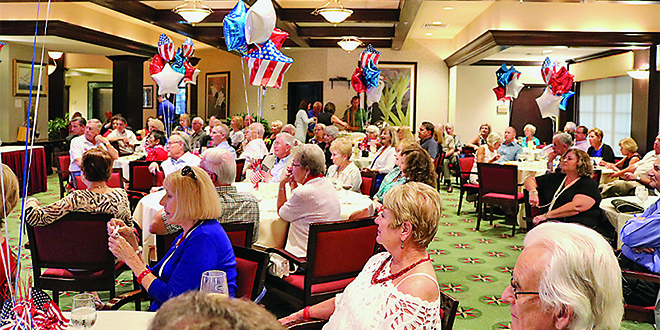 A who’s who of local Republican politics assembled on January 17 at the Marco Island Yacht Club as the Caxambas Republican Club President Litha Berger called the first meeting of 2017 to order.

Berger recognized State Senator Kathleen Passidomo, who quickly addressed those assembled before she departed for another meeting, but not before she graciously thanked the Club members for their great support in the 2016 Election.

In attendance was State Representative Bob Rommel, who lives just across the bridge in Fiddlers Creek. He won the seat held by Passidomo prior to her election to the State Senate.

Michael Nachef, former legislative aide to Senate President Pro Tempore Garrett Richter and former Marco resident, was also in attendance. Nachef now serves as the governmental relations director for the Lee Health Center, but still has roots here on Marco where his father and mother reside.

Local resident David Rice introduced the speaker for the program on Tuesday night, which centered on a celebration of Donald J. Trump’s victory over his Democratic opponent. Local resident, business owner and columnist Tarik Ayasun electrified the crowd with his presentation and narrative on the recent election, and he was interrupted several times by applause.

Ayasun would bring the 140-plus in attendance to their feet, as he hit on many of the themes of the recent Trump campaign. If you closed your eyes and didn’t know you were in Marco Island you’d swear you were at a Trump campaign rally, as Ayasun would leave the crowd wanting more before he concluded his remarks and the event drew to a close.