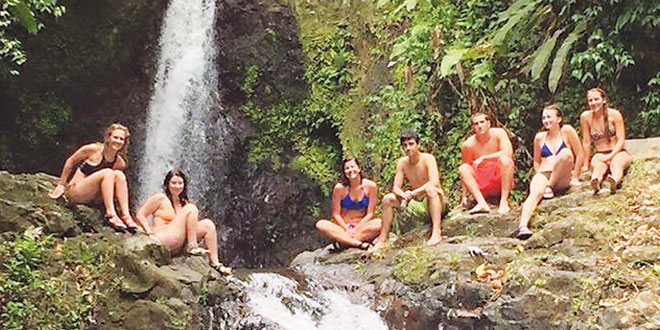 Pope Francis has proclaimed to the youth of the Catholic Church, “Go forward. Make noise. Do not be afraid!” That is exactly what the San Marco Catholic Youth Group did this past week. San Marco participated for the fourth year in Catholic Heart Work Camp. Various groups have traveled to Tampa and Belize in recent years. This year, the destination was “The Spice Island”, Grenada, in the Caribbean, one hundred miles off the coast of Venezuela.

Catholic Heart Work Camp’s mission is “to share the love of Christ as they serve the neglected, brokenhearted and the marginalized in any way needed. Love. Serve. Connect”. CHWC hopes to provide young people a positive life changing experience. I have had the privilege and honor of accompanying the youth group to Belize and Grenada.

Preparation for our voyage included fundraisers, preparation meetings and serving our church community. Teens were painting parking blocks in the church parking lot right up until the day prior to departure.

Upon arrival and prior to the start of the work week, we hiked through a rainforest to experience the Seven Sisters Falls followed by a snorkeling trip to the Underwater Sculpture Park, who’s aim is to “engage local people with the underwater environment that surrounds them using life casts of the local community”.

Once all campers arrived, local church members gave us a grand reception with a beach bbq! We tasted their national dish, Oildown, a stew made with meat, vegetables, bread fruit and dumplings steamed in coconut milk, prepared by Andy (we worked on an addition at his house). We learned to play cricket, sang and danced on the beach with local nuns and youth of the community who then serenaded us with our national anthem! The Grenadians welcomed us with bright smiles and open arms. The next day, we were grouped into over 20 teams. Divide and conquer! This brought to mind the television program, “Extreme Home Makeover” with our 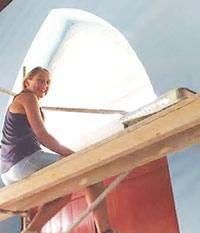 added twist, “Faith”. That is not to say that we were asked to preach to local people but to serve, love and connect as our faith teaches us.

Teams painted many churches inside and out which brought its’ own challenges during their rainy season! We cleaned and painted houses, murals, did tile work, put up a fence, worked on an addition for Andy, who has seven children and took in two more family members, worked on repairing and upgrading the community space at the Cathedral of the Immaculate Conception in the capital, spent afternoons interacting with local residents at the Dorothy Hopkins Home for the Disabled, playing with children at local schools and learned about their local hero, Kirani James. Kirani is Grenada’s first Olympic medalist in any sport, winning gold in London. Vacant and dilapidated buildings are constant reminders of the most powerful hurricane to hit the region in 2004. Many Americans may also recall Operation Urgent Fury in 1983 when American armed forces expelled a Cuban communist force and secured the safety of many American

medical students. We called their campus, St. George’s University, home for the week. During lunch and program time after a day of working hard, thought provoking questions were raised for discussion in smaller groups. Many participants spoke of the lifetime memories and friendships made during the week and reflected on how fortunate we are and the many blessings we have. My final “ah ha” moment was at the airport. I was purchasing some guava jam for my parents. The woman behind the counter saw my Catholic Heart Work Camp luggage tag and asked if I was Catholic. When I confirmed and explained what we were doing, she thanked me, with a beautiful smile as she attends mass at the Cathedral, genuinely from her heart… it’s the little things…

Plans are in motion as the Youth Group prepares to attend World Youth Day 2016 in Poland, in addition to a state side mission trip for those not attending World Youth Day. Prayers and donations are always welcome to support this ministry. Contact Kim Adamson, San Marco Director of Religious Education at 239-394-5181 extension 13.