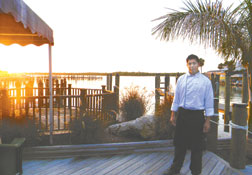 Rosanna Loach, wife of Capri founder Leland L “Doc” Loach compiled this part of the story in 1988, and it was first printed by The Timepiece, a publication of the Collier Historical Society.

An aerial view of the Isles of Capri was completed so that maps could be drawn up. The state permit for dredging was $5,000 and a charge of five cents per yard of fill was to be paid to the state.

The first dredge was brought from Ft. Lauderdale. On the way it sank in Lake Okeechobee. Doc Loach had to recover his dredge. There were problems with the owner of the dredge and Loach ended up buying it and hiring his own crew to operate it.

Staffing problems continued when the lead mechanic was found to have escaped from a mental institution and had to be returned. Another time he found two employees putting holes in the spill pipe to slow down the process. They were fired.

The dredge ran twenty hours a day for five years with many break downs. On island one, the trees were pushed over and buried. On two and three, debris was pushed over and burned before it was covered with fill. It was recommended that the fill for the road be five feet but Loach insisted on a higher figure.

The road had flooded from time to time but the higher elevation has been a necessity.

The oldest restaurant on the Isles of Capri is a fine dining establishment. Located on Johnson Bay with a sunset view of the mangroves, it was founded in 1975.

Customers nominated Blue Heron for Zagat recognition. This is accomplished by diners signing on www.zagat.com and filling out information.

Alex Alexander was notified this past fall that someone from Zagat dined at Blue Heron in June of 2010, and validated the recommendation of exceptional food and dining experience. Blue Heron is now a Zagat restaurant.

Zagat called the restaurant, “charming, perfect for romantic occasions with picturesque view.” The Blue Heron’s food is “extraordinary to perfection” with a 27 out of 30 rating.

The all inclusive meals include spreads, soup, salad, main course and dessert.

If you come by boat there are four new slips to accommodate up to 70 foot boats with free electric hook up for overnight guests who dine at the Blue Heron.