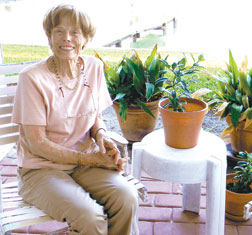 Joanne Moore talked about buying one of the first lots on the Isles. SUBMITTED PHOTOS

Among the first people to buy property on the Isles were George and Joanne Moore. Joanne made it clear that they bought in 1957, but had to work and did not build until 1976. (The assumption has been that they built right away.) George worked for a steel company in the international division living in Germany and Argentina, as well as Ohio.

They bought the lot at the end of Pompano Bay on Hawk Street from the dredging company. There was some sort of disagreement and the lot came on the market. The Moores were looking for a place. “We are Floridians and we wanted our children to feel this as home.” They flew into Miami from Germany and went to the Old Marco Inn where Doc Loach’s brother had a real state office. He took them across the river by boat. There were no houses. George and Joanne fell in love with the place, bought the lot and visited yearly, renting various places on the Isles and Naples.

“Every year when we came back on vacation Loach would invite us over to fish. I caught my first Snook off his dock. I was so excited. Fishing, boating, water skiing, that was the big thing. The kids learned to drive here.”

“At first there was nothing here. There was a sand beach with fiddler crabs. We put in a sea wall. Rosanna Loach told us there was a new county 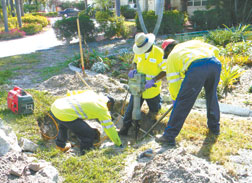 law going into effect and that prompted us to build.”

Daughter, Marilyn lives with Joanne now. Both “kids” want her to keep living in the house. They love this place. It is so quiet and natural. The Purple Martins also love living in the backyard housing provided by George Moore.

Drainage Project continuing Collier County has dug up the ditches around Tahiti Circle to clean and connect the storm drain system. New metal grates were put in wherever necessary.

The real estate market is of interest today, as well. Jeri Neuhaus of Christopher Reality describes the current market. “Inventory is at an all time low. After the bank settlements we are expecting to see some foreclosures and short sales. We are bouncing on the bottom. We still have a few more foreclosures to go through. I see signs of stabilization.

Annual rentals are very difficult to find now. There is a very short supply of good annual rentals, two or three bedrooms. Rental at Driftwood Landing, Tarpon Village, Marco Towers, La Peninsula are all doing well with our rental occupancy rate well over 80 percent. If a home is priced right under $400,000 it gets snapped up almost immediately. It takes a little longer as you go into the next price level. The steals and deals are getting snatched up.”