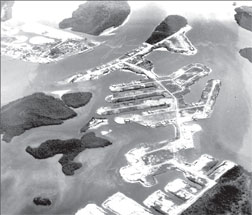 The Isles of Capri looking from Marco on a 1963 post card. There seem to be about 24 structures. SUBMITTED PHOTOS

Cookie (Wilma) Ahillen, sister of Dave Moenkhaus has vivid memories of her teenage years visiting the Isles of Capri. In the late 1950’s she and her parents stayed at the Isles of Capri Hotel and Marina. There were four units.

They lived in unit number four with twin beds, a tiny table and efficiency kitchen and a couch where she slept. It was small and primitive.

Cookie and her mother loved to fish. The family rented a little metal boat with a 10 to 15 horse power engine. They went down Johnson Bay into Rookery Bay and tied ribbons on the mangroves so that they could find the way back.

A fisherman called Ruby could see the fish in the bay and would tell the family where to fish. On one occasion they found the reds running and pulled reds in left and right. Fishing was wonderful.

Shelling was also great. She saw a school of sand dollars swimming by, their little hairs moving in the water. So many, it was hard to count. The olives would also wash up and dig into the stand. At that time taking live sea creatures was permitted.

Her parents also loved to oyster. They would go into Johnson Bay and take a hammer to the oyster beds and take home and eat raw oysters.

When they first came to the area. 951 was not paved. Bobcats would run across the road at night.

On the corner of 41 and 951 there was a Seminole teepee and a food market.

Cookie remembers the paving of 951 as something special. Also, she was delighted that Jim and Edie’s opened 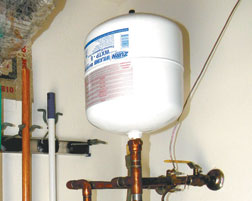 The expansion tank on the cold side inlet on top of the water heater gives the water a place to expand and relieve pressure build up.

with real food on the island, hamburgers for lunch and packed house for dinner with dancing on Friday night.

One of the recent improvements on the Isles of Capri is a new water system that provides more reliable service with higher and consistent water pressure. But, sometimes problems accompany improvement.

Church Walton, plumber and 12 year resident noted, “It seemed like there was a run on new water heaters, even my own. It had to be the new system.” He explained that the backflow preventers installed in the new system make each house a closed system and may cause an increase in water pressure beyond what the home water tank can handle.

“So, you take a shower or you wash dishes or use something running hot water,” he said. “Then you go to bed. The water heats up in your tank to whatever temperature it’s set for. Heated water expands. When it expands it builds up pressure in your tank. So, instead of having 65 to 80 pounds, which is normal, you wind up with maybe 100 pounds. That puts a lot of stress on your system, mostly on your water tank. “It’s not going to blow up every tank, but if you’ve got a tank that has a weak seam, it’s going to go, or your faucets or anything.”

A leaking or blown water heater tank can be pretty messy, so it may be wise to check the age and condition of your tank. Walton commented, “I suggest putting an expansion tank on the cold side inlet on top of the tank. That gives it a place to expand and relieve the pressure.”