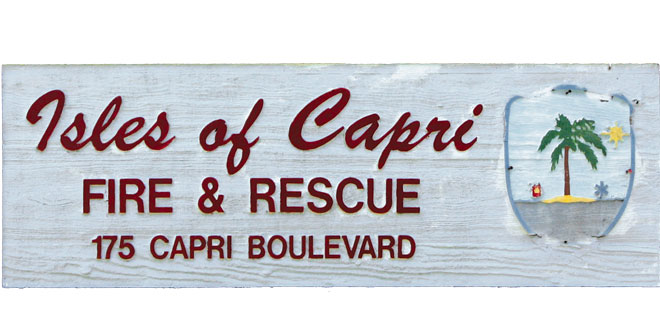 This time next year, the Isles of Capri Fire-Rescue District will be part of the East Naples Fire Control and Rescue District. Capri property owners sealed the department’s fate when they recently voted nearly 2-to-1 in favor of the highly controversial merger of the two districts. This month, the Collier County Board of Commissioners instructed officials with East Naples to move forward with preparations for a November 2014 consolidation.

“We have heard from the people,” said Commissioner Donna Fiala, whose district includes Isles of Capri, in the commission chambers. “We listened to what they said, and almost double said they wanted to go with East Naples.”

The decision caps two years of strife for the Capri department that began with the dismissal of former Fire Chief Emilio Rodriguez. The problems came to a head late last year when the 288 Fiddler’s Creek homeowners serviced by the Capri fire district began campaigning to lower their property taxes from 2.0 mils to 1.5 mils — just like their neighbors in the East Naples fire district.

This spring, the Collier County Commission voted to force the consolidation, despite a 3-2 vote by the Capri Fire Advisory Board rejecting it. East Naples proposed to take over and operate the Capri district at a 1.5-mil rate, to provide “hiring preference” to the existing Capri firefighters and to put a minimum of two firefighters on each shift at Capri. Currently, the Capri department employs nine fire fighters and has two engines. It is serviced by two Collier County paramedics through the Medic 90 ambulance. An annexation into ENFR and a millage drop to 1.5 mils would have resulted in laying off three firefighters.

In a last ditch effort to prevent the consolidation this summer, Capri firefighters and some of their long-standing supporters circulated petitions, held rallies and appealed to the BCC to conduct a public opinion survey of Capri residents to find out once and for all whether or not they favored consolidation with East Naples. As such, Collier County sent out some 2,300 public opinion surveys to Isles of Capri property owners asking if they wanted their fire district to join forces with East Naples. Of the 679 eligible responses, 235 wanted Capri’s department to remain independent, and 444 were in favor of consolidation.

Now it is up to the local Legislative Delegation to complete the task. ENFR has submitted two bills to its delegation. One requests consolidation with Golden Gate Fire Control and Rescue District and the second with the Isles of Capri district. According to ENFR Chief Kingman Schuldt, approval of the two bills will create one of the largest fire-rescue districts in Southwest Florida with 10 fire stations and about 160 people covering 300 square miles. If all goes as stipulated, the new East Naples district would come online November 14, 2014.

“We have goals and objectives we are trying to achieve,” explains Schuldt. “Our goals right now are focusing on organizational excellence, maximizing efficiencies and containing costs. We all know doing something tomorrow is going to cost more than it did today, but we believe that we are going to use resources and equipment and maximize their full capabilities while containing costs… I am really confident we will produce a better organization than with the three separate organizations.”

There also is a silver lining in the deal for the Capri fire fighters who were concerned about losing their jobs. The continuing controversy forced the BCC to maintain Capri’s 2.0-mil tax rate rather than dropping to 1.5 mils as originally proposed. This means the Capri district will maintain its funding through this fiscal year, operating business as usual until the annexation is effective next November.

Moreover, this status quo situation allows Isles of Capri firefighters to be eligible for job openings throughout Collier County Emergency Services, including the nine positions proposed for the new Florida Department of Transportation Fire Station at mile marker 63 on Alligator Alley. This station will be operated by the Ochopee Fire Department, and construction is to be complete by next summer.

“We just want the opportunity to continue doing what we do,” Capri Firefighter George Lara told the BCC recently. “It is in our blood. It is in our DNA.”

As the county, ENFR and the folks on Capri wait for the legislative efforts to commence, they are headed back to the drawing board to prepare for the eventual merger of the districts. “This is still a work in progress,” noted Len Price, an administrator with Collier County Administrative Services. “We will address issues as they arise and deal with changing circumstances, if necessary. Irrespective of the process or the ultimate outcome, the citizens, residents, and visitors of Collier County will always receive high quality, professional fire service.”