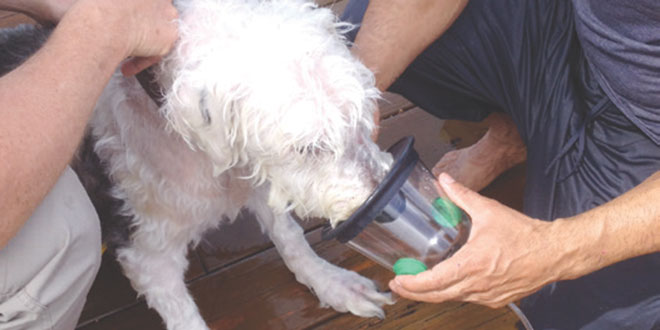 On June 15th, construction workers noticed a dog in a canal and notified the Isles of Capri Fire Rescue. Firefighters responded on Engine 90 to the location. Upon arrival Lieutenant Jorge Lara, Firefighter Chris Mercier and Collier County Firefighter Paramedic Beau Nix quickly located the dog about 75 feet out in the canal.

Arthur, a 15 year old English Sheep dog, was struggling in the water and unable to get back over the sea wall. With equipment 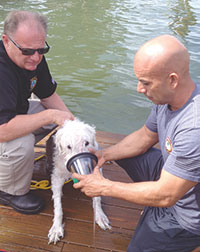 in hand, firefighters secured Lieutenant Lara to a life line. With lifeline and rescue fins, Lieutenant Lara quickly entered the water and headed for the dog. The dog gave up with no struggle. He knew his rescuers where there to help him. As Lieutenant Lara and Arthur approached the dock, the dog just rolled over. The dog surrendered to Firefighters as they quickly extricated him from the water. Arthur was given oxygen with a Pet Oxygen Mask.

A dog tag with the pet’s Identification number 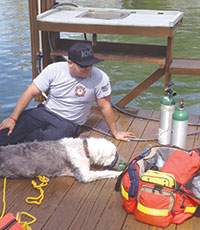 was used to locate the owner. The owner proceeded to the scene and retrieved his dog. Arthur and his owner had been successfully reunited. According to the dog’s owner, the dog had gotten out of the house and apparently fell into the canal.

According to Wayne Martin, Operations Manager, “I am proud of the action taken today by the Engine Company 90 team. Their quick thinking and quick reaction saved the dog’s life.” Martin complimented them for “a job well done.”