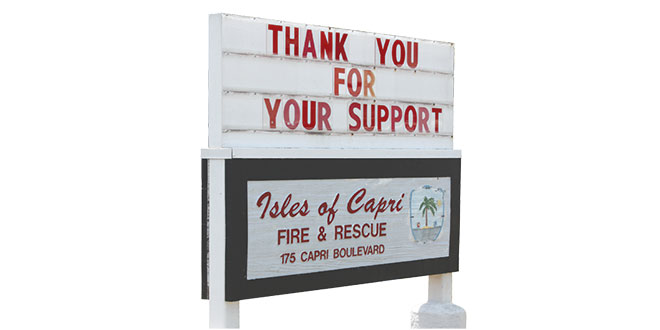 It’s all over but the voting.

On Aug. 26, the residents of the Isles of Capri will gather at the community hall to cast their ballot on the referendum that seals the fate of the Isles of Capri Fire-Rescue District (ICFRD). Whether residents will vote to annex ICFRD into the now mega East Naples-Golden Gate Fire Control and Rescue District or vote to remain independent remains to be seen, but if the referendum is approved by voters, the ICFRD will cease to exist on Oct. 1. The district has been operating since 1977.

ICFRD firefighter Lieutenant Jorge Lara hopes the community votes no. In fact, he has been working with a citizen action group called Citizens for Isles of Capri Fire Rescue to keep the ICFRD an independent fire house. Chaired by local realtor and long-time Capri resident Beau Middlebrook, the group has been posting yard signs, mailing flyers and advertising its opposition to the annexation in local publications for the last few weeks.

The Citizens for Isles of Capri Fire Rescue contend that Capri residents will have no seat on the East Naples Board of Fire Commissioners; that the annexation will result in a reduction — and possible elimination — of staffing; and that the annexation will greatly diminish the current level of service to Capri residents with no reduction in response times and no enhancement of services.

Then there is the budget question. The group also questions Collier County’s claim that the ICFRD will run an annual deficit of roughly $200,000 beginning in fiscal year 2015 if the annexation does not happen. According to County Administrator Len Golden Price, the county’s budget deficit estimates for ICFRD vary from year to year, but for FY15, the estimated revenue needed from carried forward funds is $230,000.

“With the increases in property values we are now experiencing, how does that make sense?” asks Lara. “How will you continue to run in a deficit when you are bringing in more tax revenue? Someone is not being honest.”

To be sure, a decision on the annexation question is a long-time coming and has left in its wake nasty allegations of exaggeration and fear-mongering from both supporters and detractors. The question first rose with the dismissal of former Fire Chief Emilio Rodriguez. The problems came to a head late in 2012 when the 288 Fiddler’s Creek homeowners serviced by ICFRD began campaigning to lower their property taxes from 2.0 mils to 1.5 mils — just like their neighbors in the East Naples fire district.

Last spring, the Collier County Commission voted to force the consolidation, despite a 3-2 vote by the Capri Fire Advisory Board rejecting it. East Naples proposed to take over and operate the Capri district at a 1.5-mil rate, to provide “hiring preference” to the existing Capri firefighters and to put a minimum of two firefighters on each shift at Capri. Currently, the Capri department employs nine firefighters and has two engines. 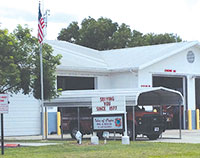 It is serviced by two Collier County paramedics through the Medic 90 ambulance.

In a last ditch effort to prevent the consolidation last summer, Capri firefighters and some of their long-standing supporters circulated petitions, held rallies and appealed to the BCC to conduct a public opinion survey of Capri residents to find out once and for all whether or not they favored consolidation with East Naples. As such, Collier County sent out some 2,300 public opinion surveys to Isles of Capri property owners asking if they wanted their fire district to join forces with East Naples. Of the 679 eligible responses, 235 wanted Capri’s department to remain independent, and 444 were in favor of consolidation. That’s a nearly 2-to-1 margin in favor of consolidation.

Armed with those results, the BCC sent word to the local Legislative Delegation to complete the task during the 2014 Florida Legislative session. East Naples submitted two bills to the delegation. One requested consolidation with Golden Gate Fire Control and Rescue District and the second with the Isles of Capri district. The bills were approved effectively creating one of the largest fire-rescue districts in Southwest Florida with 10 fire stations and about 160 people covering 300 square miles.

Still, the passage of the Capri bill was contingent upon the Aug. 26 referendum, and this fact has many waiting on pins and needles. After all, there are the 280 homeowners in Fiddler’s Creek who have vowed to break away for ICFRD and seek annexation into East Naples if the referendum fails.

However, these folks will have to wait until the 2015 legislative session to seek their own annexation, and this could spell additional funding trouble for an independent ICFRD. Based on county budget projections and assuming a 2 percent increase in property values, the district’s millage rate would have to increase from 2.0 mils to 2.5 mils to fund the service. That is if the Fiddler’s Creek residents remained in the district. Without Fiddler’s Creek, the millage rate would increase to 2.8 mils.

Then there are the ICFRD firefighters and their families. According to Lara, the county’s promises of assistance in helping them transfer to other fire houses are not being honored. “Yes, we are being offered interviews for firefighter positions,” says Lara. “I just went to an interview for a starting firefighter position. I have been on the force for 12 years, seven of them as a lieutenant. We are having to jump through hoops. There is no facilitation, no lateral transfers.”

Price disputes this stating that the Capri firefighters are being given preference and that the county currently is in the hiring process for the new Ochopee Fire Station on Alligator Alley. In fact, she says “five of the seven current firefighters applied for and will be interviewed for these positions.”

In the end, Lara and the Capri firefighters hope their efforts prevail. “Hopefully, we can negotiate that we can continue on with the station and in the community we know and that knows us,” he notes. “We just want to keep serving.”