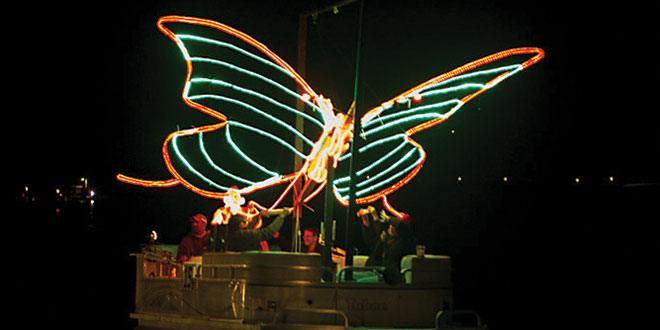 After a few years of dropping participation, the 2014 Isles of Capri boat parade saw a surge of renewed interest from boat owners and spectators alike.

On Saturday, Dec. 13, 13 vessels were decked out from stem to stern with hundreds of strings of twinkle lights, inflatable animals and holiday cheer ready to spread some wow spectators. The Island Gypsy Cafe hosted a pre-party for participants, generously donating pizza to all of the boat owners, crews and judges of the parade.

This year’s parade was chaired by Otis Tavlin and Nancy Anderson.

With the setting sun 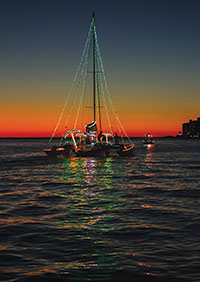 as a backdrop, the Isles of Capri Fire Rescue District boat served as grand marshall for the parade, leading the way around the eastern tip of the island and heading west out of the Marco River promptly at 6 PM. The judges — John and Linda Daniels, Ronald Oneski, Denise Snyder and Keith and Eva Taylor — had the best view of all from the dock of a waterfront home of a Capri resident.

The parade wound past the La Peninsula condos and turned eastward to Johnson Bay, weaving in and out of each of the small bays on the north side of Capri, to the 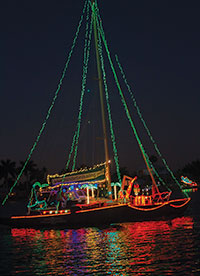 delight of hundreds of spectators, many of whom were attending waterfront Christmas parties specifically for this event.

At last, the parade passed The Capri Fish House and Pelican Bend before finishing up in front of the large waterfront picture windows of The Blue Heron restaurant, where all of the patrons came pouring out to line the docks and cheer the passing parade.

At least two of the parade participants — the sailboat Thunderbird and the beautiful butterfly display of Capri Coconuts — decided to remain at the Blue Heron and can still be seen lighted nightly until Christmas.