In 2004, waves first began to wash into the domes on Cape Romano. Photo courtesy of Mila Bridger www.milabridger.com

The mystery of the “dome home” on Cape Romano has been solved! Coastal Breeze readers asked for it and we’ve delivered. After an intense search, the family of Bob Lee, the brainchild and builder of the dome home, has stepped forward to tell their story. The oddly eccentric home has been a topic of conversation and lure since it was built in 1980. Many far-fetched tales have been spun about the futuristic bubbles, but right here, right now, the stories are put to rest.

Bob and Margaret Lee’s daughter, Janet Maples, laughs when she recalls the crazy stories she’s heard about her family’s old vacation home. “I can remember one time, we went to the drug store on Marco and some people in the row behind me were saying, ‘Have you been by those dome houses?’ And the other 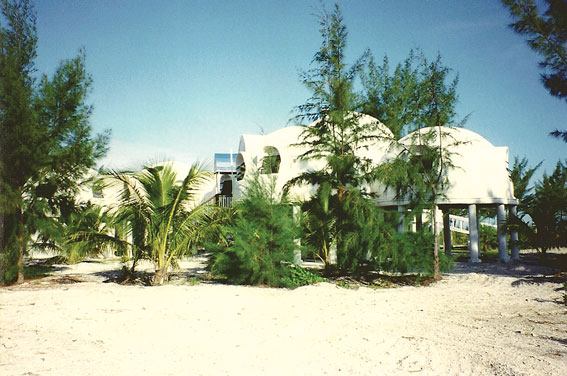 Once upon a time…SUBMITTED PHOTOS

one said, ‘Yeah, but I hear they guard that with machine guns!’ Somehow it got a reputation of being a scary place.”

The way the domes look today is much more reminiscent of a post-apocalyptic scene than in their heyday of the 1980’s. The domes that have slowly drifted apart and into the Gulf were once a fully functioning home equipped with satellite television and even a hot tub.

“Building it was the fun part for my dad, but he also loved the seclusion of living on the island; fishing, shelling and watching the weather.” An independent oil producer, Lee retired at the age of 44 and, “he started doing these other things that he loved,” continues Maples. “He loved inventing things. He invented a heat source for under the floors of our house and had an invention that would bring logs 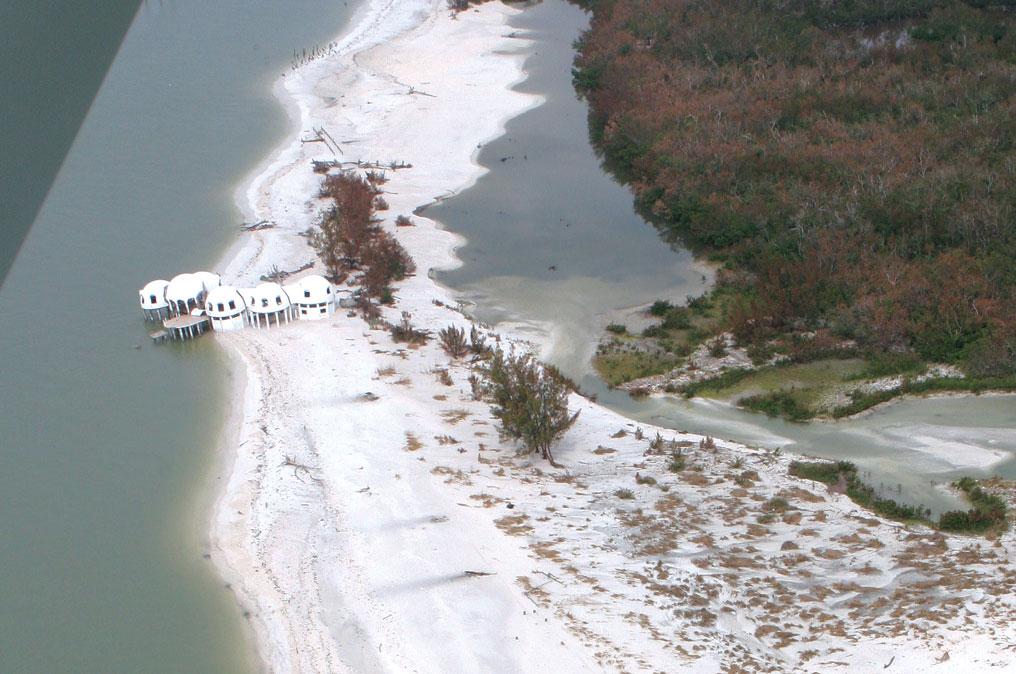 An aerial view from 2005, not long after Hurricane Wilma. Photo courtesy of Rookery Bay

in and drop them on the fireplace that came through the wall of our den. Kids loved him. He was just fun to be around; a really adventurous guy way before his time.”

The futuristic look of the dome homes is incredibly fitting. In 1980, Bob Lee began work on a home that would be completely self-sufficient; a rather unusual idea during a time of excess in the United States. Lee spent the years of 1978 and 1979 purchasing lots on Cape Romano from four different owners in order to build his dream home. But before he set to work on the property, he built a prototype on the family’s land in Gatlinburg, Tennessee.

“It’s still standing but nobody uses it because it had a moisture problem. But he perfected that before he built the next one. We still have that house

It’s hard to believe that it was once “an exhausting walk to the beach.”

and the forms that shaped the domes. He used these giant metal forms that fit together like pieces of a basketball. There was an inside layer and an outside layer and you would pour the concrete between the two layers of the form to build the domes.”

In order to get the necessary supplies to Cape Romano, Lee purchased a barge which hauled everything including two concrete mixers, the metal dome forms and fresh water to mix the cement with. “He took sand from the island to a cement-testing lab in Skokie, Illinois and found it to be the perfect aggregate, so he mixed the concrete from the sand of the island,” adds Maples.

But why domes? According to Lee’s grandson, Mike Morgan, “My grandfather designed it so that when the rain would hit the domes, all the rainwater would wash down 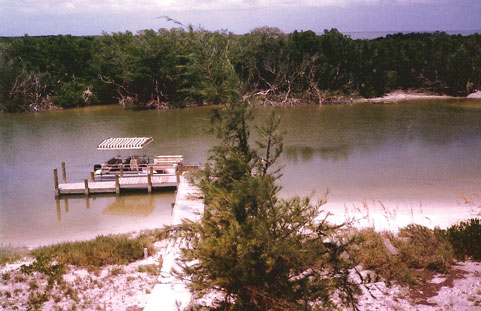 A solar-power lighted dock once ran from the house to the lagoon behind it. SUBMITTED PHOTOS

into a gutter system that he built around the domes. That would all lead into a 23,000 gallon cistern under the center dome. The water would run through filters and that’s what we would use for showers and dishwashing; things like that.

“The house was totally self-sustaining. He had several solar panels for power along with backup generators if it was cloudy for several days.” The solar panels provided free electric to the 2,400 square foot home which featured air conditioning, two hot water heaters, ceiling fans, a refrigerator, a satellite dish, hot tub, gas barbecue and two lighted wooden walkways; one leading to a lagoon, the other to the ocean.

Finished in 1982, the Lee’s and their family enjoyed the home for just two years before selling it in 1984. They repossessed the dome home in 1987 when the current owner 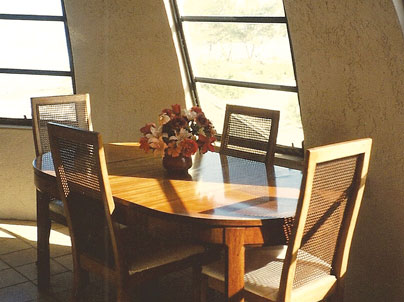 The inside had all the modern amenities and comforts of a regular home.

got into financial troubles. Bob and Margaret remodeled the interior and kept the home until 1993, one year after Hurricane Andrew. Morgan, who helped with repairs after the storm, adds, “Andrew didn’t do a ton of damage, really. The main structure’s design is very high wind resistant because there’s no sharp edges or flat surfaces for the wind to catch on. That was another thought process that my grandfather had when he built them. But the windows, obviously were not, so that was the main damage.”

Both Maples and Morgan called Cape Romano their permanent residence in the early 90’s. “My daughter turned one while we were living there,” adds Maples. Back then, “it was totally different. There were two other homes; one on stilts and a pyramid-shaped house. They had horses, dogs and turkeys. How they got a horse out there, 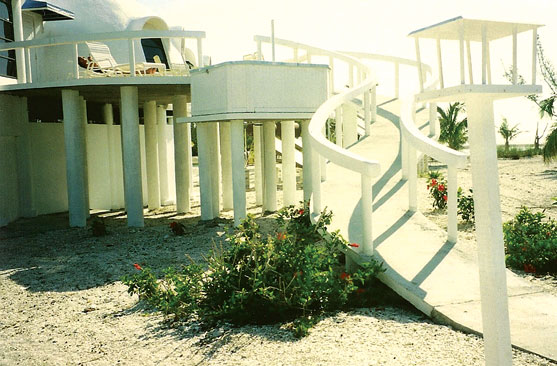 A curved entryway made its way around the family’s hot tub.

Over time, the shape of the island has changed, washing the other homes into the water. Now, it seems, the dome home is next. “I remember when it was actually an exhausting walk to the beach,” says Maples. “When Daddy started noticing that the island was going to have what he called the “teardrop effect,” he told the man who purchased the home that they had to put a seawall in. At that time, you could do that. Now you would probably have all kinds of trouble doing that.”

The current owners of the property know this all too well. Purchased in 2005, by the John Tosto family of Naples, plans were to renovate the home, making it functional once again. Up against the Department of Environmental Protection and the Collier County Code Enforcement Board, the family was told 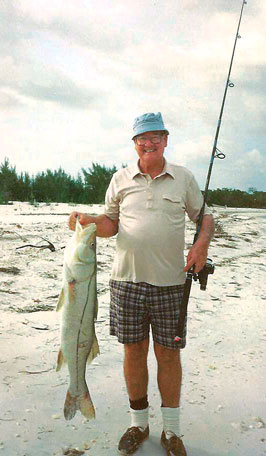 the domes must be removed from the island in 2007. Two years later, fines were issued to the family by Collier County due to lack of removal of the domes.

As the sands shift, it seems that Mother Nature may do the job for them. “It was just beautiful at one time,” reminisces Maples. “It would break Daddy’s heart to see it like it is, but what he always said before he died was that it was worth it for the time he had it.“

Those who have seen the domes for themselves certainly agree.

What are your memories of the dome home at Cape Romano? Share your photos with Coastal Breeze on Facebook! Don’t forget to “like” us as well as Cape Romano’s own Facebook page! Special thanks to Margaret Lee, Janet Maples and Mike Morgan for sharing their story and photos and to Mila Bridger for providing current photos of the dome home.