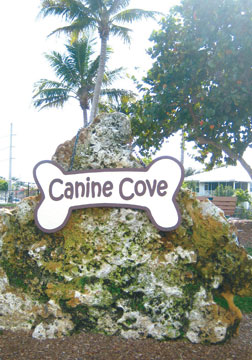 Canine Cove welcomes you and your dog. PHOTOS BY NATALIE STROM/COASTAL BREEZE NEWS

If only dogs could talk. They would probably say, “please take me to Canine Cove. I want to run, roll and romp around with my fellow furry friends.” One would assume that this is what they would say, as the joy of playing with other dogs is abundantly evident when observing their behavior at Mackle Park’s beloved dog park.

Canine Cove opened on December 5, 2009, and has been a tremendous success ever since. For many years, dogs were not allowed in any park on Marco, leashed or not. Today, however, Marco’s parks have become much more dog-friendly. According to Patty Mastronardi, Administrative Assistant of Parks and Recreation, “at first we did not allow dogs in any of the parks, but that (changed) because people kept asking and asking. So now we have a leash law in all Marco parks. We posted signage saying that you have to have your dog on a leash in the parks.”

This change in policy opened the gates of conversation concerning the building of a real dog park. Initially, a number of citizens came to the Marco Island Parks and Recreation division, requesting that something be done. “We had a dog park committee that raised about $52,000. They were very assertive and did a wonderful job. They brought it to us (Marco Island Parks and Recreation) and I was in charge of collecting all the money (donated),” explains Mastronardi.

Funding for the park came in donations of all kinds. 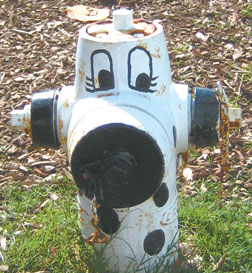 The committee placed donation boxes all over Marco Island where people could contribute a few dollars or their loose change. Others purchased placards to be placed on benches, in front of trees and on just about anything else you could stick a sign on. The Marco Island Fire Department even donated fire hydrants that are whimsically painted to look like spotted dogs. There is a “Waggin’ Wall” at Canine Cove that features the names of the many different donation contributors. Room is still available for future contributors.

Parks and Recreation hosted a dog park-naming contest through Tommie Barfield Elementary. TBE student, Cassie Sullivan, won top prize for “Canine Cove.” The name coincides with Kids’ Cove, also at Mackle Park. A plaque in her honor is placed on the large rock that features the creative name.

Another plaque honors the memory of Catharine C. Reiley, “a lover of all animals great and small.” Catharine passed away before Canine Cove came to fruition, however, her family’s estate has donated $5,000 annually, in her honor, to provide for maintenance of the dog park.

Thanks to contributors such as Cassie Sullivan, the Reiley family and so many others, the park was “raised by donations and is sustained by donations,” according to Alex Galiana, Recreation Administrative Supervisor. “We see anywhere between 40 to 60 dogs a day in season. Year-round you are still looking at 30 to 50 dogs a day. If you go there at 8:00 AM you will see at 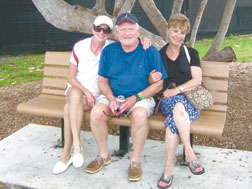 Wendy Nowlan, Sandy Kennedy and Yona Strasberg enjoy the park as much as their pets do.

least a dozen dogs in the big dog park and almost as many in the small dog park. If you go at 5:30 in the afternoon, there’s about 20 dogs on each side. We probably have, at the very least, 300 dog visits a week”

With such a high volume of animals and their owners, one would expect some problems, but Galiana insists that these types of incidents are minimal. “We get maybe one complaint every couple of weeks, but that’s about it. People do know that it is pretty much a self-governing park. We don’t have the staff to have someone there at all times so maintenance is our main function. We spray twice a year for fleas and add new mulch two to three times a year.”

He also adds that the park is basically “self-sufficient.” Through regular donations, along with the annual $5,000 from the Reiley estate, the park is paid for without the use of any taxpayer dollars.

The consensus among the dogs and their owners seems to be quite unanimous about their feelings regarding Canine Cove. As Sandy Kennedy explains, “This is a real asset to Marco Island.” Kennedy and his dog, River, a Sheltie, go to the dog park every day, twice a day. “River somehow knows when it’s time to go. He fusses if I am even 30 seconds late,” he adds. 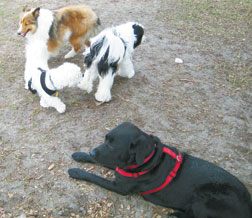 River, Cleopatra and another dog play follow the leader while Jezebel watches.

Not only is it a safe environment for their animals to socialize with others, but the people socialize too. Wendy, Yona and Sandy have forged a friendship over their love of their furry friends.

Canine Cove is open from 8:00 AM until dusk, seven days a week. Regular rules apply, such as picking up after your pets and ensuring that they wear a collar with ID and a current license tag. Aggressive dogs, females in heat and puppies under four months are not permitted. All dog owners and handlers enter at their own risk and are liable with respect to the actions of their dogs.

The park is split into a side for small dogs (25 pounds or less) and big dogs (25 pounds or more). Set on a full acre of property, dogs of all shapes and sizes have plenty of room to run and play. There are water fountains for both humans and animals and plenty of benches and picnic tables for dog owners to relax and chat.

While located at Mackle Park, 1361 Andalusia Terrace, there is a separate parking lot much closer to Canine Cove, which is located just off of Winterberry Drive. For those who want to park at the main lot and get a bit more exercise, dogs may walk along the pathway around Lake Mackle as long as they are leashed.

Open to the public for over three years now, Canine Cove has proved to be a comfortable and cozy place for both dogs and their owners.