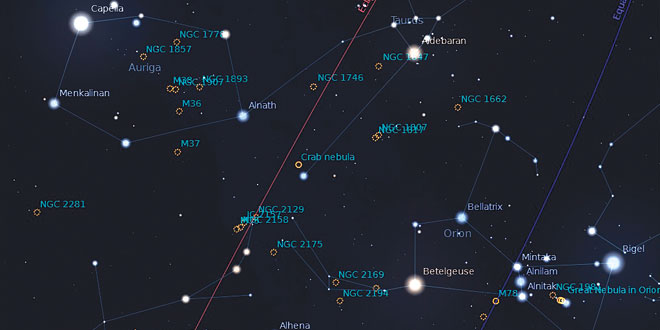 Tonight, the chart is showing just about everyone’s favorite portion of the sky, or it would be if it were not high in the sky on winter evenings when the normal temperature discourages viewing. This is not a problem on Marco Island, however; and this area contains something for every stargazer whether naked eye, binocular or telescope user.

First, notice the enormous “G” shape formed by the eight first magnitude stars: Aldebaran, Capella, Castor, Pollux, Procyon, Sirius, Rigel and Betelgeuse. Nowhere else in the sky will you find such a concentration of bright stars. This is not a total coincidence as this area lies both in or near the Milky Way, and the Orion Spur — one of our galaxies minor spiral arms.

Giant Jupiter is a temporary resident of the constellation Gemini. It simply cannot be missed even on bright moonlit nights. Only Venus and the Moon are brighter residents of the night sky. Binocular users can be entertained by the nightly dance of Jupiter’s four large satellites. A much more difficult object is the Crab Nebula. If you look, choose a moonless night, and use a rock steady support for your binoculars. Search for the faintest possible smudge above the tip of Taurus’ horn and you’ll find it. Long-time exposures actually reveal the Crab Nebula as one of the more spectacular objects in the sky.

There are any number of star clusters in this region tonight; a sweep with your binoculars along the Milky Way will reveal many. There is one star cluster on the chart tonight easily visible to the naked eye — the Hyades. The brightest members of the cluster forms the V-shaped head of Taurus the bull. Only 150 light years away, the Hyades is the closest cluster to Earth, accounting for its spread out look. The bright orange star Aldebaran is not a member, however, being less than half as far away but lying on the same line of sight by chance. The Hyades appear to be very closely related to another star cluster, the Praesepe cluster in Cancer — so closely in fact they appear to have shared a common origin. There is no relationship to the visually nearby Pleiades however.