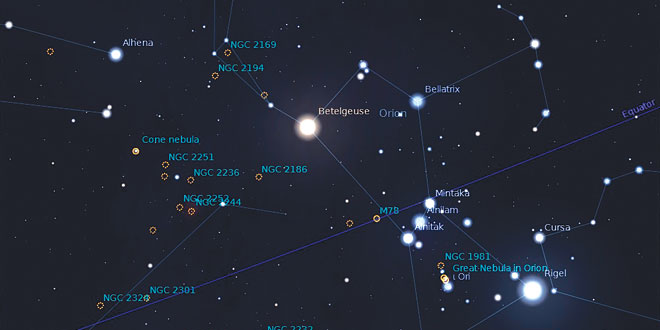 Here on Marco, the constellation Orion rides much higher in the sky than our northern visitors are used to. This allows the bright stars to really shine out with their full brilliance. Tonight, the chart depicts a close-up of this fascinating area of the sky.

The first thing a casual stargazer should notice is how the bright stars in this constellation are all very blue — with one huge exception, Betelgeuse. This star, in the upper left of the constellation, is a red supergiant; despite the name, it looks rather closer to a deep orange color. Hubble photographs show a disk that is red with a yellow spot near the center. There is considerable debate in scientific circles as to exactly what causes this. Betelgeuse is one of two stars that are both near enough and large enough to show a visible disk but only to space-based Hubble.

If you own a pair of binoculars, the area in and around Orion is something of a paradise. In particular, notice the Great Orion Nebula, so bright that it is even visible to the naked eye in suburban skies. At a dark sky viewing sight, the nebula looks like a fat fuzzy star. With binoculars, the nebula is clearly visible as a glowi

ng cloud. Interestingly it glows for the same reason a fluorescent light glows. Stars in its heart emit copious quantities of UV light that causes the oxygen in the nebula to emit a greenish glow. Some observers claim to spot the green color with binoculars although that is hard to believe. In a large amateur telescope, the color is easily evident.

While you have the binoculars out, see if you can locate the nearby M78 nebula and the brighter Cone Nebula. The second most well-known nebula in the area is the famous Horsehead Nebula, just a little south of Alnitak. Invisible to binoculars and almost all telescopes, it is primarily a target for photography. Probably no general interest book on Astronomy is missing a photograph of the Horsehead.

Although this week’s chart does not clearly show it, Orion can be used as a pointer towards other constellations, a little like the Big Dipper. An imaginary line drawn from Rigel through Betelgeuse points in the general direction of Gemini. Drawn the opposite direction, the line points to the center of Eridanus. A line extended downwards from the belt stars indicates the direction of Sirius, and extended upwards indicates Aldebaran. Drop due south, and you will reach Lepus the hare. Orion’s shield faces Taurus the bull.