Can Pickleball Improve Your Tennis? 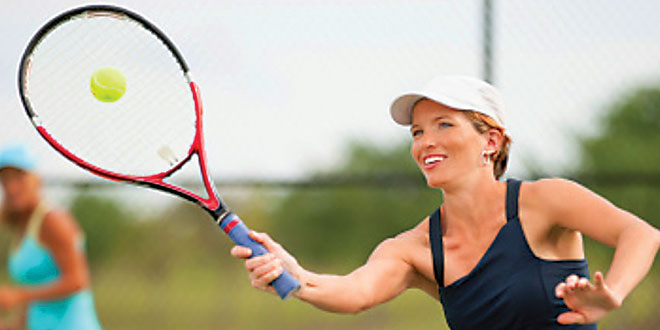 Ok, I know all you tennis players first response is, if it’s a no volley zone, how in the heck is it going to improve my doubles play at the net in tennis? The truth is, there are several aspects of pickleball which will improve your abilities as a net player in tennis.

First, as stated before, fundamental pickleball strategy encourages players to get up to and play at the net position. Because of this, you are hitting more volleys and half volleys, aka dinks, in every point, which naturally makes you become more comfortable and yes, more aggressive at this position.

Notice I said volleys and half volleys. Lets begin by comparing volleys in both sports. I want to first state that a volley should be more of a catching motion than a hitting motion. With that said, in pickleball, we are not allowed to step into the kitchen and strike the ball in the air. We must wait for the ball to get to a point that is more within reach of where we are positioned and we are using more of a blocking motion, deflecting a spike volley/put away shot. This motion discourages players from swinging at volleys, as they would tend to do in tennis.

In tennis, I encourage players to move to the ball and get as close to the net as possible when volleying, I also encourage them to feel like they are going to catch the ball with the head of the racquet, rather than to swing and strike at it.

As a tennis instructor, the biggest problem I see with players (myself included) in the execution of their volleys is that they tend to get over anxious and swing at the ball. I guess it’s basic human nature, if you put a 27-inch

stick in my hand (aka a tennis racquet) I feel a need to swing it at something.

As a pickleball instructor, I also see players (myself included) getting over anxious and wanting to swing at a volley. The simple fact that the size and length of the paddle are considerably smaller than a tennis racquet naturally makes it feel like it’s more of a part of my hand. Because of this, I tend to want to use it more like my hand to catch the ball and less like a stick (aka tennis racquet) to swing at the ball. This, along with the fact that I am not allowed to strike the ball as a volley if I am positioned within seven feet of the net, forces me to have the patience to wait for the ball to either get to a position where I am able to volley it, or wait and let it bounce and hit a dink.

As an instructor, I feel one of the most challenging shots in the game of tennis is the half volley. A half volley is a shot where we are required to volley a ball at our feet as the ball is bouncing. Half volleys in the sport of pickleball are referred to as dinks.

The main difference of the utilization of half volleys in tennis and pickleball is that in tennis, I mostly only find myself having to execute a half volley if I am approaching the net behind an inadequate approach shot and I have allowed my opponent to place the ball at my feet. Usually, in this instance, my half volley is more of a defensive shot. Not necessarily a strategic position I would choose to be in.

In pickleball, the utilization of half volleys/dinks is a shot I want to use offensively, by choice, to attempt to get my 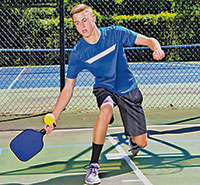 opponent to pop the ball up on my side of the court and allow me or my partner an opportunity for a spike volley put any shot.

It is not uncommon that on a 3.0 to 3.5 level of doubles tennis, players only approach the net and execute volleys if they are pulled into that position by their opponents. However, because of the smaller size of the court, an experienced 3.0 to 3.5 level doubles pickleball player will be coming to the net and executing a strategy of dinks and volley put aways on a point-by-point basis.

An added benefit to becoming proficient at dinking, is that it naturally teaches us how to take speed and pace off of the ball, which as stated before, is what we should be trying to do with our volleys in tennis, controlling the speed of the ball.

Along with this, as an accomplished pickleball player, I must be able to confidently execute offensive and defensive strategies in the kitchen, hit soft, finessed, well placed drop shots, as well as create extreme angles with my shots and strategically/efficiently utilize space on both sides of the net. All of which will only benefit and improve my net game in tennis!

So does pickleball make you a better tennis player?

The answer is yes! The sport of pickleball is strategically competitive, physically aerobic and just plain fun to play! It is also a great way to make a new group of friends.

The Marco Island Racquet Center (MIRC) offers pickleball, tennis and racquetball. We have daily clinics, round robins and open play for all levels. The MIRC also provides racquet stringing and re-gripping services. We are open to the public seven days a week and have yearly memberships available.

Wayne Clark is a certified professional tennis instructor with over 25 years experience coaching players on all levels of the game. Wayne is also qualified in pickleball instruction. He has been the head instructor at The Marco Island Racquet Center since 2001. The Racquet Center offers clinics, private and group lessons for both tennis and pickleball. Coach Wayne’s Island Kids Tennis juniors program runs year round and has classes for players from kindergarten through high school. Contact Coach Wayne by email at WClark@cityofmarcoisland.com, by phone or text at 239-450-6161.

6 responses to “Can Pickleball Improve Your Tennis?”