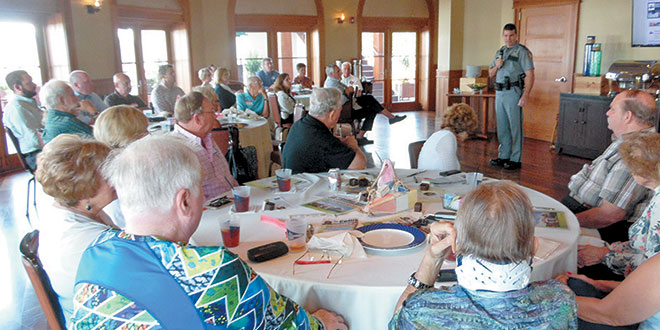 Can Orlando happen here? Collier County Sheriff Kevin Rambosk is pondering that question like so many law enforcement agencies across the country.

The question to him, “Does the FBI alert the Sheriff’s Office on potential terrorists or terrorist activity?”

“No” was the sobering response.

Rambosk spoke at the East Naples Civic Association luncheon on June 16. It was five days after the horrific shooting and killing of 49 people at The Pulse in Orlando in the early hours of June 12.

Rambosk followed by saying that the county has forged a relationship with the FBI and does exchange information with what goes on elsewhere.

But the impact of such an attack “won’t be the FBI or the CIA as first responders,” he said. “It will be the sheriff’s office and other local law enforcement agencies.”

“It will be deputies going to the gun fire. We cannot wait to send people in. It will be law enforcement going in to save as many lives as possible, followed by fire and rescue and EMS (Emergency Medical Services).”

Since 9-11 the county is part of a Joint Terrorism Task Force.

Education too, plays a major role, locally and nationally.

For its efforts it received the Social Media Internet Law Enforcement Award at the 2015 International SMILE Conference.

It has an Active Shooter Program that is part of school and neighborhood safety. So far 24 homeowners associations 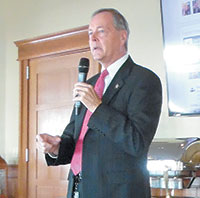 have taken part. Businesses are also learning how to best make the workplace safe.

The county also continues to advance its computerized location dispatching program that moved forward in March.

It had the ability to send North Naples fire and rescue that was traveling US 41 and police on Park Shore Drive to a Crayton Road address in one minute, 30 seconds, Rambosk said.

What it boils down to is, “Terror, hate or mental illness cannot win out,” he said.

“With a mix of 300 Habitat homes, the crime rate is much lower,” he said. Habitat for Humanity has rules to follow for those receiving the homes. They have also done well in other developments, Victoria Falls, Trail Ridge, Charlee Estates and Regal Acres.

A concern continues to be the need for more deputies. For an area that includes East Naples six officers cover 180 square miles.

“We have openings for 500,” Mulholland said.

With present salaries, which Rambosk said are similar to other areas of the state, living in Collier County was more costly.

“Collier County needs to be more committed to housing for this pay classification,” he said. “The cost of living isn’t as high in other parts of the state.”