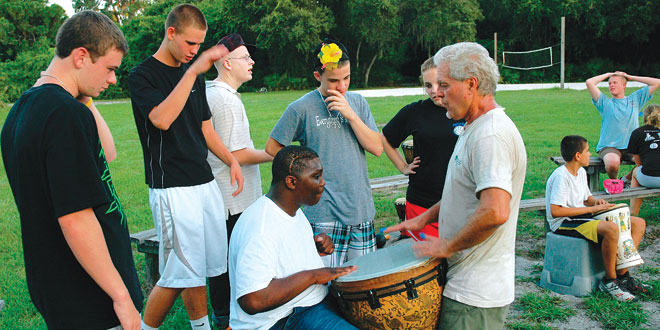 Kelly Bennett and Sarah Reveland have a lot in common.

Both young women are 21 years old. Both have been Lely High School students, and both have a ton of friends. Both of their families live on Marco Island, and both are members of St. Marks Episcopal Church on the island.

This summer, both young women also will attend Camp Able, a five-day (July 17-21) summer camp focusing on people with special needs and hosted this year by the Episcopal Diocese of Southwest Florida and St. Marks on Marco Island. Kelly, however, will be the camp’s head counselor, and Sarah, who has Downs Syndrome, will be a camper.

This distinction matters little to the two young women, though. “I grew up knowing that someone with special needs is a person like anyone else,” explains Kelly, the daughter of St. Mark’s Rector and founder of Camp Able, Father Kyle Bennett. “No matter what your disability is, you can do anything you put your mind to. There is no limit.”

That is the general philosophy of Camp Able, and after six

years at DaySpring Episcopal Conference Center in Parrish, FL, Camp Able is coming to Marco Island for the first time. During the week, 36 special needs campers ranging in age from 10 to 43 and about 100 counselors will enjoy the sun, sand, water and wildlife of Marco Island through the camp’s theme — “Goin’ Down South.” Campers’ special needs include Down Syndrome, Autism and Cerebral Palsy.

“This year, we will have a localized camp using local resources,” notes Father Kyle. The local community has been only too happy to help out. Scuba Marco will teach Camp Able campers to scuba dive in the pool at the Greater Marco Family YMCA, and fishing captains Jody Weis (Weis Guy Charters) and Mike Krenzer (Pro-Fish-In-Sea Charters) will take campers fishing.

Campers will explore the wonders of the area wildlife and ecosystems at Rookery Bay, and Marco Island Water Sports will tour campers through the history of the 10,000 Islands area aboard The Calusa. Campers also will get the chance to kayak and paddle board, and will pedal their way around the island

Camp Able boasts a counselor to camper ratio of at least 2-to-1. SUBMITTED PHOTOS

courtesy of Island Bike Shop. Rick’s Island Salon and Day Spa will host a special day for female campers complete with a pedicure as well.

Each day will bring new activities culminating in a special evening event. Campers will be treated to a down-home hootenanny on Wednesday, a drum circle on Thursday and a dance party on Friday. Still, the piece de resistance — an all-camper talent show — will happen Saturday night, July 20, at 7 PM in St. Mark’s sanctuary.

“We are not going to let (the campers’) disabilities get in the way. At the same time, we want to allow things to organically happen for each camper,” Father Kyle explains.

Father Kyle’s work with those with special needs began while he was in college in the 1980s. After his first summer at Camp Bratton-Green in Canton, MS, he was hooked. In fact, Father Kyle’s work in Mississippi inspired him to launch Camp Able with the blessing and help of the Episcopal Diocese of Southwest Florida.

“These experiences are part of the foundation for my ministry,” he says. “These

experiences define how I view God and other people.”

This carries over to his family as well. Both of his daughters have been involved with special needs camps since they were young children. “I really fell in love with working with special needs kids there,” Kelly notes, so much so that she currently is studying to be a speech pathologist at the University of Mississippi.

According to Father Kyle, Camp Able’s focus on abilities and not disabilities goes for both counselors and campers. For counselors — most of whom are the creme de la creme of high school students who endure a rigorous evaluation process to earn one of the coveted volunteer counselor spots — it is about being able to reach out and connect with a group of people who spend most of their lives being marginalized.

“For the counselors, it is about learning to put someone else first, to be the campers’ best buddy. It is very powerful to see these super-cool high school kids putting photos from camp on their Facebook pages everyday,” explains Father Kyle.

“It really is the highlight of my summer,” Kelly adds.