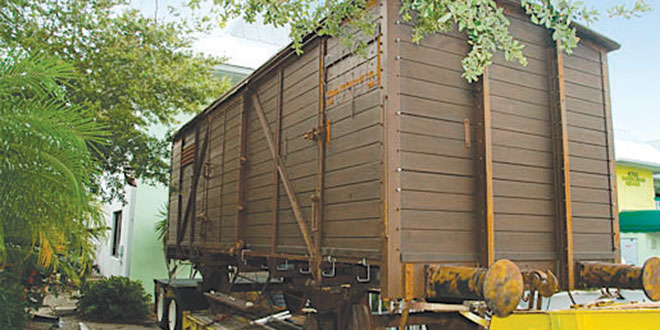 The Cultural Alliance of Marco Island and Goodland (CAMIG)* partnering with the Naples Holocaust Museum is proud to present the Boxcar Exhibit, an authentic railway relic from World War II. This 10-ton artifact, which was built in 1919 and was in the German Railway Service until 1945, will be on display through February 28th in the parking lot at the Marco Island Historical Museum, Tuesday through Saturday from 9am-4pm. There is no charge to the public.

A docent from the Holocaust Museum will be on hand to answer questions at the boxcar on the 19th, and 26th from 10-2pm. Survivors of the Holocaust are also scheduled to speak about their experiences on the 26th from 2-3pm in the Museum’s Rose History Auditorium.

Accompanying the boxcar are 19 oil paintings of Irena Sendler and her work during the Second World War by Bill Farnsworth. The paintings were used to illustrate his book Irena Sendler and the Children of the Warsaw Ghetto and then were donated to the Holocaust Museum. Known as the female Oskar Schindler, the Polish born Sendler, who died in 2008 at the age of 98, is credited with having saved some 2,500 Jewish children at great risk to her own personal safety. A selection of the paintings will be on view at the Museum’s Rose History Auditorium on the evening of February 19th and the Marco Players Theater during the performance of “The Interview”.

A special presentation of the award winning documentary Paper Clips will be shown on February 19th at 7 pm at the Museum’s Rose History Auditorium. Paper Clips tells the story of a group of middle school students in Whitwell, Tennessee, who as part of their study of the Holocaust, tried to collect six million paper clips, one for each of the six million Jews killed by the Nazis and ultimately succeeded in collecting over 25 million paperclips. It is a story of love, tolerance and understanding. This special showing of the movie is free to the public.

While there are several boxcars throughout the country, including one in Whitwell, Tennessee, the Holocaust Museum Boxcar is the only one that is used as a traveling educational tool, promoting a respect and understanding of the Holocaust. Since its acquisition in 2007, the Boxcar Exhibit has had an impact on over 45,000 people and has been to more than 60 locations in a six-county area.