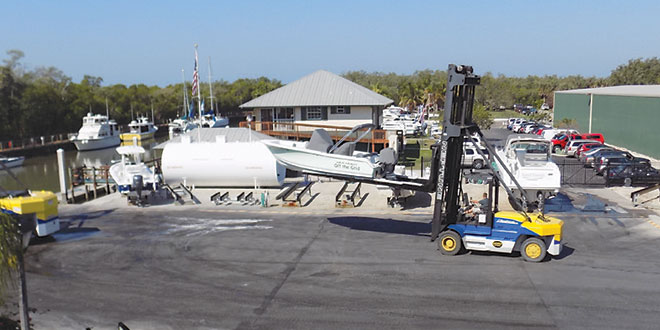 I have lived across the street from the Calusa Island Marina (the “Marina”) for the past 10 years. Despite the rumbling of forklifts and the beeping of back-up signals, I am content to be hemmed in by a navigable waterway on one side, and a boatyard on the other. Boats and boating have always been high on my list since I had my own wooden rowboat at age 12. I began my seafaring days in 1950.

In 1950, the Marina was just a part of a largely undeveloped area on the southeastern end of Marco Island. Although fishing cottages were being brought over from Caxambas in 1949, they were installed a few hundred yards to the east of where the Marina is today. The Mackle brothers, dba the Deltona Corporation, started development of the island in 1964, but by the mid 1970’s were meeting concerted opposition from environmental groups. In 1982, Deltona settled a massive lawsuit, which created preservation areas and prohibited development in those areas. Certain exceptions were made, among which were tracts on which Stevens Landing, Key Marco, and the Marina were subsequently built. In 1987, the original investors purchased the land from Deltona, and in 1995 construction began on the dock master’s building, dry storage facilities and docks. In March 2008, Andrew Barksdale was hired as general manager.

Barksdale grew up in Naples and graduated from Naples High School in 1980, along with his close friend Greg Bello. Bello says that they did a lot of boating on

Andrew Barksdale at his desk.

Naples Bay and flying a two-seater, piloted by Barksdale, from the Naples Airport. The two were later roommates at the University of Florida. Barksdale graduated in 1984 with a degree in English. Bello went on to medical school. Both have made a positive impact on our corner of the island.

After graduating from college, Barksdale held a succession of jobs, many of which were businesses that he founded and led. He opened a successful travel agency in Naples, which he sold in 1993. He then opened a Naples import-export business, which grew to become one of the largest importers of mohair in the U.S. He moved this company to Maryland, where it was best situated to grow and prosper.

Barksdale’s first love was boats, however; a love that would ultimately bring him to Goodland. Barksdale’s grandfather was a Coast Guard captain. At age 8, Barksdale got his first boat, a 7-foot “sportyak” with oarlocks, and spent countless hours rowing around Naples Bay. “Since then I have always owned a boat,” he says, “Boats have always been near and dear to my heart.” He got a commercial captain’s license at the age of 19, and ran a tugboat for a time.

In March 2008, Barksdale was offered the position of general manager of the Marina. He jumped at it, and moved back to Naples with his wife and son. “It was the height of the recession. Everything was stagnant in Southwest Florida,” Barksdale recalled, “I looked on this as a terrific challenge to grow a marine 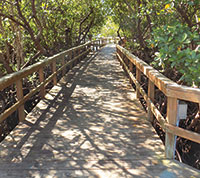 The boardwalk to the outer docks.

business in a beautiful location. I couldn’t resist the opportunity to take something over in the worst and leanest of times and bring growth and regeneration to it.” His ideas and drive must have impressed the partners, who made him president in August 2008, and managing partner in 2009.

Since then, the Marina has almost doubled its dry slip capacity. I well recall the construction of two additional three-story boat sheds across the street from me. It now has capacity to dry store 420 boats in its 5 boat sheds. Two 25,000-pound and one 35,000-pound forklifts ensure expeditious movement of boats to the launching site and back. Barksdale notes that most of his customers are accustomed to deluxe amenities up north. “Although they come here for relaxation, they still demand a high level of service,” he says, “We try to get them out on the water as quickly as possible. They are really coming to get away from it all for a while.” Barksdale gives much of the credit to his staff of 11 for the efficient operation of the Marina.

Barksdale proudly enumerates the amenities offered by the Marina, which he says makes it unique. In addition to the 420 dry slips, there are 84 wet slips, and 25 more slips in the basin adjacent to the office. There are in addition, 14 individual boatlifts (the charter fleet uses the lifts), an area for boat on trailer storage, and a boat ramp. The forklifts can lift boats up to 45 feet in length

and 35,000 pounds in weight. Barksdale acknowledges that the Marina is part of a Planned Unit Development (PUD), which allows for the construction of a hotel and restaurant on Marina property. If and when it happens, the buildings would go up on the remote western side of the property. “Conditions are not yet right,” Barksdale says.

Although, through a quirk of political maneuvering, the Marina sits just outside of unincorporated Goodland, it has become a part of our fabric and vitality. The boaters, who come over to Goodland for good times and good eats after leaving the Marina, will come back another day and bring friends and family. Many Goodlanders are grateful for nearby mooring space for their larger boats. Barksdale’s right-hand “man” at the Marina is Cheryl Bataran, a perky and amiable Goodlander. The Marina supports most Goodland community events and fundraisers with both money and/or donations of merchandise for raffles. Barksdale has made it a point to be sensitive and accommodating to those of us who live just across the street. It was a sea change when he took over. Barksdale has always been a stalwart supporter of the Goodland Civic Association. “I feel a strong connection to Goodland,” Barksdale told me, “We want to be good neighbors and a participating part of the community.”