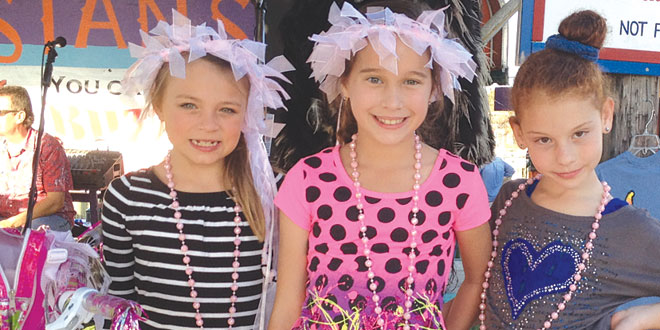 Ava Crossan, Kate Drasba and Sydney Pope made a pact to donate the brand new bicycle to Victoria if any of them were to win.

One by one, Buzzard Princess contestants took the stage at the annual Mullet Festival at Stan’s Idle Hour in Goodland, hoping to win the coveted crown by dancing to the “Buzzard Lope.” The competition was fierce yet friendly as they “flapped their wings up and down, took a step back, turned round and round.” It was so friendly, in fact, that three of the contestants made a pact before the dance began — whoever won would donate the brand new bicycle prize to a lo-cal, sick young girl.

Sydney Pope and Ava Crossan are both daughters of Marco Island Firefighters. Every year, their fathers, along with other off-duty Marco firefighters of Local 287, set up a stand 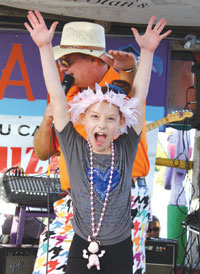 and grill up hot dogs and bratwursts during the Mullet Festival. This year, the 30th anniversary of the festival, took place over the weekend of Jan. 25.

“Close to 20 years ago, the guys put (the stand) together with Stan, and it just kind of stuck,” explains Dan Stoller of the MIFRD. “Every year, we raise money from the sales for someone local and in need.”

This year, Victoria Law, an eight-year-old diagnosed with Leukemia, was chosen by Local 287. “(The Laws) are a local family and Victoria has grown up in the area. We heard about what was going on and contacted her parents and asked if we could donate the money to her. They said they would be 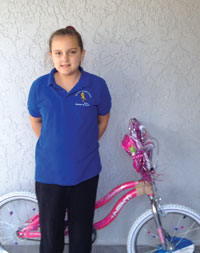 Sydney, her friend Kate Drasba and Ava knew about Victoria through the MIFRD. The young, healthy and kind-hearted girls danced as hard as they could, but not for themselves. In the end, Sydney won, and the bike was given to Victoria.

Every year, the money raised during the Mullet Festival goes to a different local cause. This year’s recipient received more than just money. Congratulations to Victoria on her new bicycle, and congratulations to the three young ladies who already understand the importance of philanthropy.