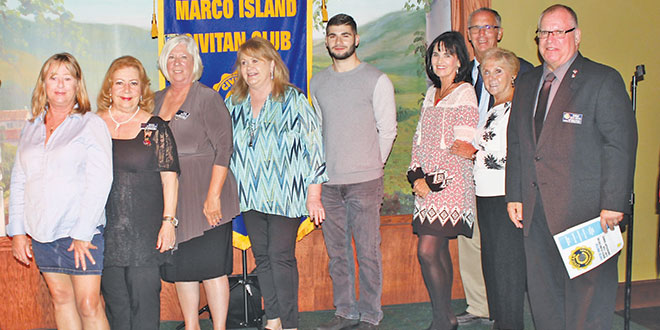 The Marco Island Civitan Club has spent its first year of existence getting up and running and involved in some of the community’s charitable efforts.

Formed last October, the Marco branch of the national volunteer service organization has been involved in raising funds and volunteering for St. Mark’s Episcopal Church’s Camp Able summer program for people with special needs, as well as the Marco Island unit of the American Cancer Society’s annual Relay for Life program.

“We’re in existence to help fundraise and better the lives of developmentally challenged adults, including those who are Alzheimer’s patients,” said Anthony DeLucia, who is one of the club’s founders and its first president.

That fundraising includes support for the University of Alabama at Birmingham’s Civitan International Research Center, which is the first institution in the U.S. dedicated solely to researching developmental disabilities and Alzheimer’s disease.

This year, the Marco Civitan Club raised funds for Camp Able with a Christmas in July fundraiser, and 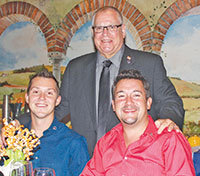 also by selling chocolate bars provided by the Marco Island Chocolate Company. DeLucia said they also work in conjunction with the Naples Civitan Club on events such as the Special Olympics and a Valentine’s Day dance for children and their families. Next year the Marco Civitans may begin assisting a baseball league for special needs children in Naples.

“It’s real exciting,” he added. “It’s a real thrill to give back to the community.”

Based in Birmingham, Civitan International is a 99-year-old organization with more than 40,000 members in 29 countries. The organization is dedicated to helping wherever a need arises in a community, whether it’s collecting food for a homeless shelter, to volunteering at a retirement to home, to constructing a playground for children with disabilities. A special emphasis on helping the developmentally disabled was adopted in the 1950s.

if there was sufficient interest in starting a club here, said DeLucia. Marco received its charter from Civitan International last October, with a membership of more than 30 people, including one corporate member, the Marco office of BMO Harris Bank.

DeLucia said he joined because, “When I went to the meeting, I was impressed by their mission statement and what they wanted to do.”

The Marco Island Civitan Club held a first anniversary dinner recently at Mario’s Neighborhood Bar & Grill on Marco, which included the swearing in of officers, who serve two-year terms, along with the group’s directors, who are usually members of another Civitan club that serve as advisors. The celebration was also attended by Deb McCoy of Inverness, a former governor of the Florida District of Civitan.

“We reflected on the accomplishments of our first year and laid out the ground work for anticipated events for the next year,” said DeLucia.

He said the club’s membership has remained essentially steady, 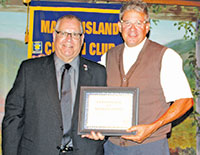 currently standing at 31 people, a solid number for a new organization, and even those that have been around for awhile.

“I think we’ve accomplished some of our objectives that we set out to do. The biggest objective was to let people know that we’re out there, that we exist, and what we do for the community. I think it’s a very necessary part of the community and it helps to make the community a better place.”

The Marco Island Civitan Club’s next fundraising endeavor will be at the city’s 50th Anniversary of Modern Marco Concert, set for November 21 at Veterans Community Park. The club will have a booth there selling soda, water and chips.

Meetings are held at 6 PM, the second and fourth Tuesday of each month at Margarita’s Restaurant in Marco Town Center. Guest speakers are brought in for the last monthly meeting.

For more information about the club or to donate, contact DeLucia at 239-285-6785 or jukeboxtonyd@yahoo.com, or via the Web at facebook.com/marcoislandcivitanclub.