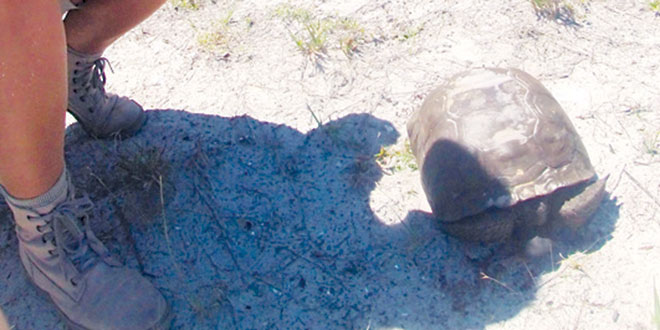 Coming to a community that has an appreciation for nature has been one of the pleasures of Dana Dettmar’s first few months as the City of Marco Island’s environmental specialist.

“One thing I enjoy is when I come across citizens that are as concerned about the environment as I am,” said Dettmar. “It’s good to see that there are advocates out there. A lot of what I do is accomplished through the help of volunteers, and I appreciate the time that they donate to me and the city and the environment here on Marco.”

Artificial reefs in the Gulf of Mexico and monitoring the conditions of some of the island’s signature wildlife have kept her busy since she assumed the post in March.

Dettmar has been coordinating Marco’s segment of the Artificial Reef Project at the Community Foundation of Collier County. When completed, the $3 million project is expected to inject about $30 million annually into the county’s tourism industry by creating a diving industry here, and expanding eco-tourism, hotel stays, dining, shopping, boating, fishing, bait shop revenues and more.

One reef complex has been completed 27 miles off of Marco’s shoreline, while a second, located 12 miles offshore, should be done within six weeks to two months.

Believed to be one of the Western Hemisphere’s largest artificial reef projects, the system will consist of six 500-ton reefs the size of football fields, each containing six smaller pyramid-shaped 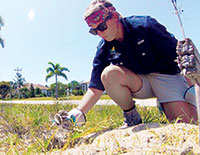 Dana Dettmar, the City of Marco Island’s environmental specialist, tidies up a burrowing owl nest in the city. PHOTO BY DON MANLEY

Work began in January on the project, which is financed by $1.3 million in grants that Naples, Marco Island and Collier County received from BP Global’s Gulf Tourism and Seafood Promotional Fund. The fund was established after BP’s Deepwater Horizon oil rig exploded in the Gulf of Mexico in April of 2010. The remaining funds were acquired through private donations.

Dettmar has also been overseeing the shorebird and burrowing owl nesting seasons on Marco. She said it’s been a tough year for least terns and black skimmers, but a banner year for burrowing owls.

Marco is Florida’s second largest nesting area for least terns and black skimmers, and 2015 turned out to be a dismal year for both species’ offspring. The birds’ two-month long nesting seasons begin in April and May, respectively. In both cases, there were “nesting failures,” no surviving offspring, because of predation by crows, she said.

“The crows are really bad on the beach and the main attractor is garbage,” said Dettmar. “If people don’t clean up after themselves at the beach, it feeds the crows. There were some garbage cans that were left unattended. It’s unclear who the garbage cans belong to, whether it’s Collier County or the state, so they weren’t being emptied 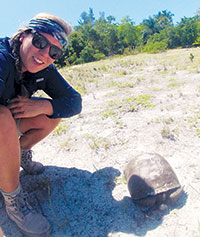 as they should. The crows saw the nesting area and it was an easy target for them.”

In many cases, the crows were stealing the eggs before they hatched, but they also were taking the hatchlings.

Dettmar said she will meet, at some time this year, with representatives of the Audubon Society of Southwest Florida and the Florida Fish and Wildlife Conservation Commission, and perhaps others, “To see if we can figure out some ways of preventing another nesting failure.”

The burrowing owl nesting season stretches from February through July and, “All the eggs had hatched and the chicks have fledged,” said Dettmar.

She said there were 471 owls and chicks in 2015, in 162 different locations on the island, as compared to 456 owls and chicks last year, and that those totals have been steadily rising since 2013.

Dettmar also participates in a program begun by her predecessor, Nancy Richie, known as “Owl Prowl,” in which volunteers monitor and maintain Marco’s burrowing owl nests. She has also stepped into Richie’s role as staff liaison to the city’s Beach Advisory Committee.

Next on her “to-do” list, a project Dettmar has been working on with the city’s Beach Advisory Committee and others to create a fertilizer usage ordinance for Marco.

“We’re in the process of putting together a workshop for such an ordinance,” she said. The ordinance’s goal would be to reduce the excess nutrients that can flow into canals and cause algae blooms and decrease water clarity.”