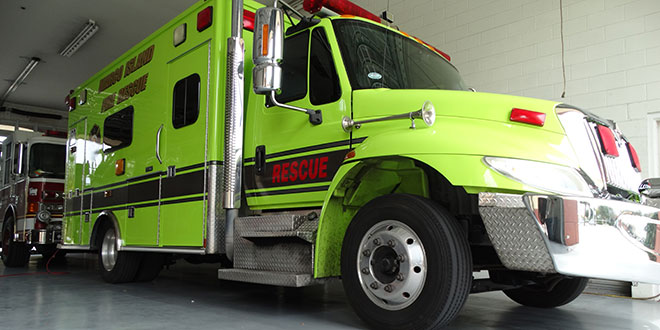 Mid-afternoon on Wednesday emergency personnel on Marco Island were dispatched to two unrelated incidents; one of which resulted in the death of roofing contractor on Marco Lake Drive and a lightning proximity strike at the south end of the island to a teenager walking on the beach.

Units from Marco Island Police, Fire/Rescue and Collier County EMS were initially dispatched to Front Street on the island for a possible lightning strike. The actual location of the incident was on Marco Lake Drive and involved two workmen from a roofing company, one of which brought an aluminum ladder into contact with live wires above him.

Initially bystanders believed that lightning had struck the ladder, but an employee of a local firm witnessed the actual event and the contact with the wires. One of the workmen, a 24 year old male was killed as result of the incident and another worker received minor injuries.

“Workers have to be cognizant of their surroundings, especially in regards to electricity and making unintentional contact with lines and other devices to prevent terrible incidents such as this,” said Marco Fire/Rescue Chief Mike Murphy.

The teenager and his mother, brother and friend were walking up from the water’s edge to seek shelter when a bolt of lightning hit in their vicinity. That strike rendered the 15 year old unconscious for approximately 25 seconds; “when the son regained consciousness he immediately jumped up and ran for the boardwalk and in the direction of the 7-Eleven and never stopped until he reached there with the other members of his party pursuing him,” said Sergeant Matt Goetz who responded to the call made from the nearby store.

“He was very shaken up and somewhat confused,” said Goetz. Marco Fire/Rescue treated him there and Collier County EMS transported him to a local medical facility for further evaluation. No one else was effected by the strike.

Due to the intensity of the lightning in the area Sergeant Goetz requested assistance for additional personnel to clear the beach. “We did received some initial resistance from beach concessionaires and others but all would comply eventually comply,” said Goetz.

“We will always err on the side of caution when it comes to safety and Sergeant Goetz and our personnel did an exceptional job at great risk to themselves to protect those on the beach. All reports we had detailed numerous strikes in that area which would have endangered lives,” said Chief Al Schettino of the Marco Police Department.

Check www.coastalbreezenews.com for more information regarding this story and more breaking news.