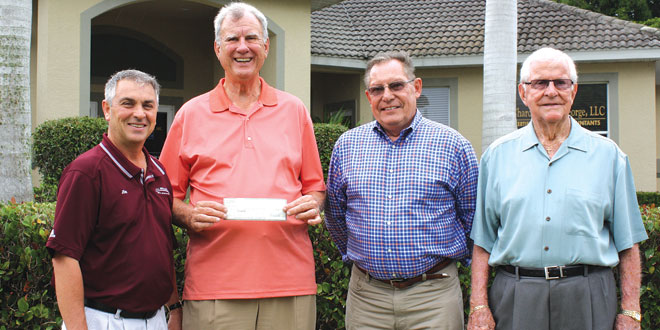 The 40th Annual Eagle Open held at the Rookery Golf Course on April 20, was a hole in one – literally. The golf out­ing’s proceeds went to both Marco’s Sunrise and Noontime Rotaries, but the big bucks went to Doug Edgar, a Collier County Schools System bus driver who hit a hole in one.

A.R.A. Insurance Inc., of Marco Is­land sponsored the 8th hole and offered a $10,000 reward to anyone who made a hole in one. This was the only hole with such a prize. An old hat to getting a hole in one, Edgar has now made three – but the latest had the greatest pay-off. “That 8th hole is brutal if you’re in the wind,” remarked Jim Bonfitto, President of A.R.A. Insurance.

Whatever way the wind was blowing that day, it was clearly in Edgar’s favor. Or maybe it was simply karma. “I saw the ad in the paper and since I’m the bus driver for Marco Island Charter Middle School, Tommie Barfield Elementary and the Marco students who go to Lely, I thought I would enter the tournament to support the community.”

Adding to the theory was Dick Sha­nahan, the golf outing chairman. “In 40 years of the tournament, we’ve never had a hole in one.”

Congratulations to Doug Edgar for his accomplishment and care for his community.