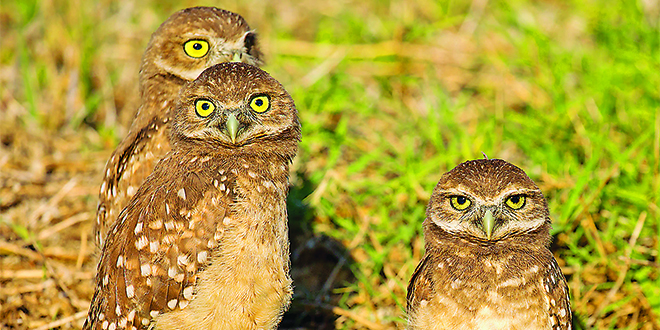 Valentine’s Day may have come and gone, but love is in the air for Marco Island’s burrowing owls!

According to Jean Hall, project manager of Marco’s Owl Watch Program, “Burrowing owls have started pairing up as early as December and into January and February. You’ll also notice a lot of digging at the burrows. Before laying eggs burrowing owls also collect an assortment of small items such as bottle caps, metal foils, paper scraps, even flowers all possibly to decorate their burrows. When approached, the burrowing owls will make defensive noises such as hissing or alarm chatter, and they will also bob their heads to express distress or excitement. You might also notice a collection of mammal waste at the entrance of their burrow as a bait for their favorite insect.”

Training for Owl Watch Volunteers
Training for Owl Watch Volunteers will take place at Rookery Bay on March 11, 2017 from 9:30 AM to 11 AM. “This is going to be an exciting breeding season,” Hall continues, and not just for the owls! Hall is encouraging interested residents to reserve a spot for the upcoming training session on March 11th at Rookery Bay. Volunteers are needed to help monitor burrowing owl sites and help gather data. The Owl Watch Project is coordinated by Audubon of the Western Everglades. The  project is to monitor neighborhood sites during nesting season from mid-February through mid-July. Full-time residents 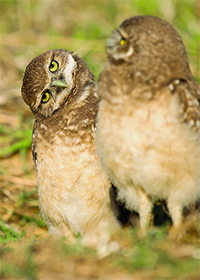 Add a little “warm and fuzzy wildlife” in your life – Join the Owl Watch Volunteer Program.

are invited to attend and be part of an exciting and very popular citizen science project.

New this season is the addition of Liz White to the Owl Watch Project. White is a doctoral student from the University of Florida. Over the past year, White has been working with the burrowing owls of Cape Coral and private ranch lands as part of a study that compares owls living in cities to owls living in rural areas. She has been banding and studying them and will add the burrowing owls of Marco Island to her field study.

According to White, in the short term, banding the owls allows her to study burrow fidelity: the likelihood of individuals and pairs remaining and breeding in the same burrow year after year. White claims that, “The data will also show reproductive success and count the number of juveniles each pair raises. These types of data are important for the long-term viability of the Marco Island population.”

White will provide more details in her presentation during the training session. It will be packed with new and exciting information and will offer a review of existing monitoring protocols.

Help save your neighborhood burrowing owls and reserve your spot in this very important project by sending an email to: owlwatchmarco@gmail.com.